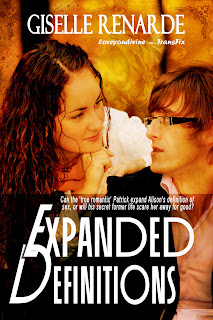 This one's a first--and for someone who's written well over a hundred short stories, there aren't many firsts left. You know I've got a lot of work on the market involving transgender characters, right? Well, I realized some time ago that I was always writing about trans women...most likely because I've got one firmly lodged in my...umm...let's say life. ;-)
Even though Sweet and I both have friends and acquaintances who are female-to-male transsexual, I had never written any stories involving FTM characters. Just never got around to it...until now!
Just in time for Valentine's Day, loveyoudivine Alterotica brings you my new, totally romantic, really sweet (but also graphic and explicitly sexual--this is me, after all!) EXPANDED DEFINITIONS.

When Patrick claims he's satisfied by nothing more than giving a woman pleasure, Alison doesn't believe him. She's convinced men are never contented until they've 'shoved their cocks down my throat, or up my ass or…I don't know…into an electrical socket.' Can Patrick the true romantic expand Alison's definition of sex, or will his secret former life scare her away for good?
Excerpt:
“The trick,” Patrick told me, “is to find someone who complements you.”

My throat produced that familiar noise that sounds something like a giggle, but only comes about when you’re trying not to cry. “Yes, you really don’t compliment me often enough. I’ll feel much better if you tell me I’m pretty.”

“Of course you’re pretty, but that’s not what I’m talking about.” The off-handed compliment made my heart soar. “What I mean is that if you look for someone who’s identical to you, there are too many sames.” To illustrate his point, he withdrew his fingers from mine, only to press his fingertips against my fingertips so they exerted some pressure. “When someone’s the same as you, all the sticky-outy parts meet up and you deflect each other. You see what I’m saying?”

“Yes,” I sniffled. It suddenly occurred to me that this might be a break-up conversation, which I don’t think I could have handled on a first date.

“But when you meet a person who complements you—and I don’t mean this in a sexual sense—all the sticky-outy parts on you correspond to all the curvy-inny parts on them.” Patrick brushed his fingertips down a touch until his were between mine. Our fingers no longer deflected one another. Now, they snuggled in, fingers woven between fingers, until we were holding hands again. “You see? When people complement each other, they fit together so easily.”


Was he talking about us? I didn’t want to ask; it was too early on. Instead, I sat perfectly still, gazing down at our interwoven fingers as though they might open to reveal a crystal ball. Was that my future cradled in the sweating palms of our hands? I had my doubts, but I could so easily be swayed.

It's available for purchase now from All Romance ebooks, and in a couple days I'm sure it'll be up at Amazon and a bunch of other retailers, too. Best of all, it's only $2.00 at ARe, so Buy Now!
Big Hugs,
Giselle Renarde
Canada just got hotter!
Posted by Giselle Renarde at 1:37 PM