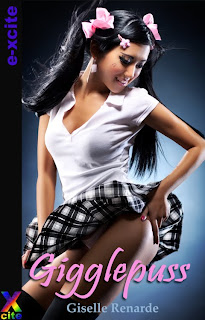 I know every new release is my new favourite, but Gigglepuss is my absolute new favourite for reals! (Until the next one, of course. LOL) And the cover! Love it, love it, love it!
Gigglepuss is an erotic lesbian short story from Xcite ebooks and...oh boy, it's hot! Even my editor kept telling me how much she enjoyed this one. I take editor compliments as high praise, because they read so damn many stories and don't usually express opinions about them.
Anyhoo, enough of my blabbing. Here's the blurb and excerpt. Trust me, this one is well worth the $1.49 you'll pay for it at ARe. It's pretty rockin'.


After working in the same restaurant for four years, Lorna develops a sudden and explosive crush on quirky Mitsuki. Though Mitsuki doesn't seem to oppose Lorna's advances, every time Lorna tries to kiss the girl, Mitsuki giggles. For a cocky dyke like Lorna, giggles are insulting ... almost infuriating! A sacrilege! Can Lorna quell the giggles, or will she join in?
Excerpt:
I kissed her on Tuesday, and she giggled.
I kissed her on Wednesday, and she giggled.
Thursday I vowed not to take another chance. I wasn’t used to being laughed at. Other girls didn’t titter when I pulled them close, took their soft cheeks firmly between my palms and pressed their luscious lips to mine. Other girls understood the seriousness of my intent. But other girls were not Mitsuki.
My ego was battered and bruised, but I couldn’t resist. I couldn’t resist those pink lips gleaming like liquid glass under a thick layer of gloss. I couldn’t resist those hazel eyes, which sparkled even more brilliantly than her lips. She reminded me of a Japanese anime schoolgirl, the way she flirted and teased with nothing but the bat of an eyelash. But Mitsuki was real. She was flesh and blood – warm flesh and cold blood, it seemed to me, because I kissed her again on Thursday, and she giggled.
I left work in a hidden fury that night. I didn’t want her to see how exasperating I found her, or the restaurant, or this situation, or anything. Cool as a cucumber – that’s Lorna. Ask any of the closet bi babes in this godforsaken boonie-ville and they’ll tell you the very same: Lorna never loses it. Lorna’s always in control. The guys around here are scared of me – they cross to the other side of the road when I’m marching down the sidewalk – but the women? Oh, they’re a different story altogether.
Women love me. They just don’t know it until I tell them. And, actually, it’s less a telling than a showing. I catch some gorgeous marriage-laden MILF or some barely-legal pretty checking me out, and I hold their gazes. I don’t let go. They’re spellbound. I know when I’ve got them mesmerised. I know they’d follow me to the ends of the Earth and, when we arrived there, they’d let me do whatever I damn well desired.
Well, I don’t usually trail them along quite that far, but it’s never been too hard to force-feed that look that says, ‘Follow me’. Up they get, excusing themselves from their friends or family or date-night with the hubby. ‘Just going to powder my nose,’ they say, because the women in this goddamn town never stray beyond euphemism. These are girly girls, even the grown women. They don’t piss; they powder.
Though they don’t piss or powder once I’ve made eye contact. They walk right past the restrooms, straight down the hall to my filthy post-war industrial kitchen. If it’s summer weather, I pull them out into the alleyway and press their backs to the brick wall. The garbage cans are right there, but I’ve never heard one of them complain about the smell. They’re already too intoxicated by the spell they’ve let me cast, and they go limp in my arms. They don’t put up a fight. They don’t chatter or gab, and they definitely don’t giggle. I kiss them and they take it. They might sigh or gasp – in fact, they usually do – but I’ve never heard a single one of them laugh.
If it’s spring, when a young woman’s fancy turns to thoughts of lust and her wardrobe turns to breezy little dresses, I might just hike up the girl’s skirt and let her pussy ride my palm. Otherwise, I’ll just launch my hands up her top and thumb her tits through her bra. If one of those nipples escapes, so much the better – I’ll squeeze it between my thumb and forefinger until she’s weak at the knees.

For less than the price of a coffee, Gigglepuss is absolutely worth a look. Buy it now at All Romance ebooks. Coming Soon to other vendors.
Hugs!
Giselle Renarde
Canada just got hotter!
www.wix.com/gisellerenarde/erotica
Posted by Giselle Renarde at 10:59 PM