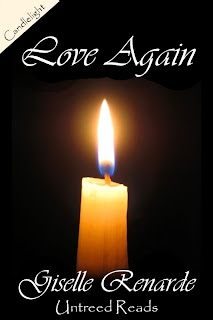 My latest release, a short story from Untreed Reads' Candlelight line of literary romance fiction, is about the kind of love that happens "again"--the kind that hits you after the teen years, after college and love and marriage and kids and kids in college. The kind that sweeps you off your feet and makes you feel like you're beginning the cycle all over again. That love.

Nearly forty years after high school, Karen attends her best friend Frida's funeral and is reacquainted with Frida's younger brother. All grown up, Karl is no longer the scrawny kid she remembers. He's now suave and incredibly handsome. When Karl takes Karen back to their childhood neighborhood, with each lending the other support while laughing together in their old playground, they realize life will go on. And, they may just be together as it does.

Excerpt:
“Well, if it isn’t a sight for sore eyes!” the man in creased khakis called out, letting out a hearty laugh. Was that any way to speak at a funeral reception? She would have liked to escape, but where to? In any case, it was too late now; she’d been spotted.

“Good is an understatement!” he interrupted, shovelling coffee cake down his gullet. “Now, if memory serves me, you were a pudgy little lump of a girl back in high school. Just take a look at you now! Wowza!”

“Well, that was a very long time ago,” Karen replied, half-prepared to leap over the sofa to get away from this guy. As she looked in all directions for some mode of escape, her desperate gaze fixed on a familiar face across the room. Her heart surged at the sight of him. Strange, how a man always looks his best in funeral attire.

Murmuring, “Will you excuse me?” Karen manoeuvred her way around the sofa. As she snuck away, Harvey was still rambling on about the new television he’d just bought.

The distinguished gentleman in the fine black suit offered his palm when she approached him. When he opened his mouth, it was only to speak her name, “Karen.”

“Karl.” She breathed his name, slipping her hand into his. The feel of his skin nearly made her gasp, but she quickly recovered to offer, “My sincere condolences.”

He squeezed her fingers. “I can’t believe Frida’s gone.”

“I can’t believe how long it’s been,” Karen said, relieved to have finally found someone whose depth of emotion matched the enormity of the circumstance. Frida was dead. “Doesn’t it seem like just a couple years ago we were at school together? It’s been more than thirty now. Can you believe that? I can’t. It doesn’t seem possible. The years escape us, don’t they? Frida was my closest, dearest friend and I’ve barely spoken to her since…”

She’d come over to comfort Karl—lovely Karl with the kind grey eyes, caring Karl who had just lost his sister—and now she was the one whose cheeks streamed with tears. “Oh, I’m so embarrassed,” she cried, fishing through her purse for a tissue that wasn’t already soaked with funeral tears.

“It’s only natural,” he consoled, extending a handkerchief with the initials KHW stitched in the corner.

The sight of those imperfect blue letters seized Karen’s heart. “Frida made this for you,” she stated. “She made it in Home Ec in tenth grade. I remember.”

Karl nodded. “Frida stitched it up for my fourteenth birthday.”
“I was there.” Karen burst at the sudden recollection. “I was there for that birthday, remember?”

“And I grumbled, of course, because what would a fourteen-year-old boy want with personalized hankies?” Karl asked. He chuckled forlornly before brightening at some mysterious thought he didn’t share.

Tracing her fingers across the stitching, Karen sniffed away the last of this round of tears without polluting Frida’s handmade gift. She’d rather preserve it like the Shroud of Turin than risk its ruin. Chuckling along with Karl, she remarked, “Frida never was any good at crafting. Mrs. Fairchild gave her a grade of C minus on this hanky.”

“I still have yours as well,” Karl said, almost abruptly, like he’d been preparing the line and was suddenly ready to deliver it.

Reflecting back nearly forty years, she replied with a faint, “That’s right, isn’t it? I remember I got an A plus on the assignment.” She could still see them seated at the rows of Singer sewing machines, recall the scent of food preparation as the other half of their class worked at the cookers on the far end of the room, and feel Frida’s ever-presence at her side. “It’s funny, the things you remember.”

“It doesn’t seem so long ago,” he began, staring at the yellowing scrap of cloth between her fingers. “But I suppose it was, when you think about it objectively.”

Mid-sentence, an elderly woman sitting stiffly across the room waved him over. Perceiving her need for him, Karl began by saying, “Thank you for coming. The whole family appreciates your support,” and then he shook his head as if shaking off an old habit. “I’m sorry, Karen. I’m acting as though you were just any well-wisher. You and Frida were practically sisters all those years ago.”

Gulping, she nodded. Her throat burned too badly to speak.

“Don’t go far,” he went on, easing his way across the crowded room. “We’ll catch up when I’ve done my rounds.”
Love Again is a sweet romance available now from Untreed Reads, and many other distributors such as All Romance ebooks.
Hugs,
Giselle
Posted by Giselle Renarde at 9:01 AM