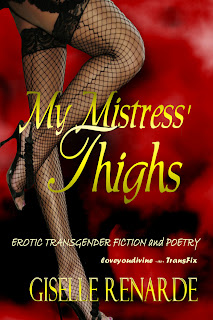 I've been waiting for this day. My erotic transgender fiction and poetry anthology, My Mistress' Thighs, is now available in print and as an ebook. I got a copy of the print book in the mail today and, I'm telling you, it is GORGEOUS. It's all full of pictures and stuff...oh, and words too. Over 300 pages of words, in fact.
Okay, I'm giddy, but seriously--it's a wonderful collection. Am I allowed to say that? I know I wrote it, but I have such confidence in this book as a whole. It looks beautiful and it's full of my favourite stories involving transgender characters who just happen to have sex sometimes. They fall in love too, and they have trepidations and they have issues, but ultimately love wins out. Isn't that the way life should be?
I usually write a foreword to short story anthologies, and I didn't for this one. Only a dedication: For my Sweet. Truly, this book is for my girl more than for me. No, that's not true--it's for us, and for you. That's why I chose to include never-before-published poetry between the stories. Sweet taught me how to write a sonnet. I wanted to open this book with a poem called "Fear of Drowning" because it was the first sonnet I ever attempted, and I wrote it as a gift for Sweet. Now we're sharing it with you. It begins:
This line never to cross, instead we hide,
But peer in quicksand silence, sinking will,
From sybaritic splendour on this side
To realms of pure affection waiting still.
I invite you to be my guest in this little world of a book, to take my hand and come with as sybaritic splendor opens the gates, as it so often does, to those unknown realms. Join me.

Apart from Hollywood starlets, Pearl Paulsen was the most recognizable woman in the country. When she first returned from Europe, her photograph was smeared across the cover of every national daily. Even now she appeared in the odd newsreel, still greeted by the jeers and hisses of cinemagoers. But George never hissed, and he held to the hope that very few among the hecklers held any feelings of enmity toward poor Pearl.

And now she stood before him, chatting with the dapper men and elegant women of her sycophantic clique. Pearl Paulsen! What a glamorous girl she’d become since the war! With her blonde SwirlaWave hairdo and her deep red lipstick, she looked nothing at all like the young private George had landed beside on the beaches at Normandy.

His mouth opened and a name tumbled out. The wrong name: “Howard!”

Pearl’s head whipped around. Her gaze was hard when it met his. And then recognition sparked, thank goodness, and her expression softened. She smiled faintly at first, but her lips soon wore a full-blown grin. Excusing herself from her elite circle, she ran to George and threw her arms around his shoulders.

“Why if it isn’t good old Georgie Kensington! Aren’t you a sight for sore eyes!” Backing away to get a load of George in full military uniform, Pearl snapped up her fallen shoulder bag from the ground. Her wide smile gleamed. “How long has it been? How are you? What are you doing in the big city?”

George wasn’t terribly interested in talking about himself. His life was a bore. He’d much rather hear about hers.

“Is that fellow giving you trouble, Pearl?” one of the men from her clique called out.

“Heavens, no!” she chuckled. The late-evening sky threatened with drizzle, and Pearl grabbed George firmly by the arm and dragged him beneath the hotel’s overhang. “I would like you all to meet a darling man I served with in the army. This is Private George Kensington.”

He’d risen significantly in rank since the war, but George didn’t bother her with that information. The clique mumbled their hellos and then resumed conversations amongst themselves—all but the man who’d interrupted their reunion. “So you knew our girl Pearl on the battlefield, did ya?”

The man’s intense smile made George nervous. “We were like brothers,” he replied in earnest.

George gazed down at his feet. “Why, no ma’am. No, I certainly don’t.”

It was no secret Pearl had once been Private Howard Paulsen—no secret to anybody anywhere. The whole country had been treated to the most intimate details of her transformation when she arrived home from surgery in Europe. “Private Paulsen went abroad and came back a broad,” the joke went. She was one of only a handful of individuals across the world who’d experienced a full change of sex, and she was famous for it.
Purchase My Mistress' Thighs in ebook format at All Romance ebooks or loveyoudivine Alterotica or other retailers
Purchase the paperback edition at Amazon
Posted by Giselle Renarde at 10:39 PM