Your Readers Are Uneducated Morons 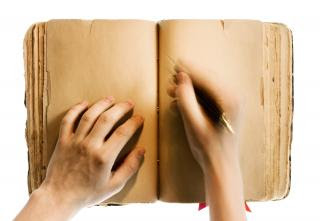 So...have I ever mentioned I'm alumna of the same college as Margaret Atwood? We weren't there at the same time, of course, (she's considerably younger than I) but it's still pretty much my only claim to fame.

When I was a kid, the one item that consistently appeared on my Christmas list was "a university education." Hahaha, yes, better than a pony, etc, but my mother would take one look at that and say, "It's all well and good to want a higher education, but I'll not be paying for it." And, true to her word, she didn't. And that probably comes across as bitter, but looking back I'm actually very happy to have been spurred to work hard and pay my own way. I think I probably value and respect my degree more than a lot of people whose parents paid their way.

(By the way, that bit about Margaret Atwood being younger than me was a joke. I'm actually not in my seventies. Thought I should probably clear that up.)

Why am I thinking of education? Well, an industry (un)professional recently “reminded” me that readers of erotica are “uneducated” so I should stay away from big words they’re unlikely to understand. I was kind of like… ‘scuse me? Should I even start deconstructing that statement? Because, seriously, we’ll be here all night. Suffice to say…well, two things:

I’m educated and I write sex for a living. Why? Because I choose to do so. I've worked in other industries, in business and the arts, and I far prefer writing erotica. I've always said I write more for myself than anyone else, so I assume the readers who will most enjoy my work are readers who are somewhat like me.

Actually, I've had other authors disclose to me that they've had industry (un)professionals tell them exactly what I was told: that readers of erotica aren't very smart, aren't very educated, don't know a lot of words. Whatever you're writing, you should dumb it down for them. Don't want to confuse their little peanut brains. Well, here is my educated response: fuck that! Insulting readers by establishing this strange Us vs Them of "We the Educated Creators" and "They the Stupid Consumers" is not going to fly with me. I'm not going to look down on readers. In fact, I'm bowing low and offering the work up, praying to the gods of erotica that they will enjoy what I've created for them.

Like I said, we could be here all night if I let myself go on. So I'll stop now. But, who knows? You might have something to add.