A Rose for All Women: The Montreal Massacre, 22 Years Later

Sometimes we fall into habits. I do a lot of volunteer work with women's organizations, particularly those helping women and children escape domestic violence, but I've been working with these charities for so many years now that I do it all by rote. It's on my calendar: go there, do that. I don't really think about the why anymore.

Today marks 22 years since the Montreal Massacre, when 14 female students were murdered by a gunman expressing his hatred of "feminists." This anniversary has since been named the National Day of Remembrance and Action on Violence Against Women in Canada. From the government website:

December 6 is the National Day of Remembrance and Action on Violence Against Women in Canada. Established in 1991 by the Parliament of Canada, this day marks the anniversary of the murders in 1989 of 14 young women at l'École Polytechnique de Montréal. They died because they were women.

As well as commemorating the 14 young women whose lives ended in an act of gender-based violence that shocked the nation, December 6 represents an opportunity for Canadians to reflect on the phenomenon of violence against women in our society. It is also an opportunity to consider the women and girls for whom violence is a daily reality, and to remember those who have died as a result of gender-based violence. And finally, it is a day on which communities can consider concrete actions to eliminate all forms of violence against women and girls.

Today I watched news footage from that day in 1989, and it was every bit as devastating to me today as it was 22 years ago. The difference is that today I know I'm taking action in many forms against gender-based violence and discrimination. Of course, watching this made me think, 'I need to do more': 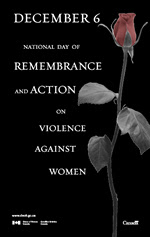 The government of Canada has produced some beautiful posters you can order for your classroom, organization, or for yourself. I'm guessing you have to live in Canada to order them, but I'm really not sure.
For details, see the Status of Women website here.
In an hour or so, I'll head out the door to put in some volunteer hours with an empowering, feminist, trans-friendly organization that's especially close to my heart. Usually, going there and doing the work is just an event on the calendar. Not so today. I've been thinking too much about violence and victimization. Today I give my whole heart.
Hugs,
Giselle
Posted by Giselle Renarde at 4:31 PM