Sapphic Signs: I Get It by Jodi Payne

Can you believe we've arrived at Sagittarius already? Hope you've been enjoying these Sapphic Signs posts, everyone. Get out there and read some lesbian fiction! 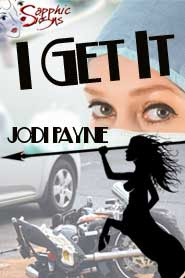 No one ever expects to end up in the hospital, least of all adventurous Casey, who’s suffering from a head injury. Her case intrigues Dr. Catharine Hill, a commitment-phobe who’s avoiding troubles in her personal life. As Casey’s story unfolds with the help of her girlfriend Jane, Catharine begins to see the light about her relationship with her own lover, Fran. Can Catharine get it before it’s too late?

My mother hated motorcycles. If she were still with us today, she would tell you that I was the kind of kid that did exactly the opposite of what I was told. In everything but this one thing, she'd be right.

I don't remember exactly how old I was when I had my first motorcycle ride, maybe six or seven. I remember the first curves we took, my uncle Bill and me. I was small enough that I had to hook my fingers through his belt loops to hold on because my arms were too short to reach around his waist. I was wearing a white helmet that was so big on me it would slide down onto my nose when we hit a big enough bump.

The way we leaned to one side and then the other, hugging the corners, felt so natural to me; a balancing act of speed and weight. I remember taking a deep breath at one point and letting it out slowly and after that there was nothing but me, my Uncle Bill, the hum and grind of the bike's motor, and the sunshine. I couldn't stop smiling the entire trip. I didn't have the words to explain how it felt to me then, the way my six year old heart felt as we flew down those country roads, but now I can tell you that it felt like freedom. It felt like flying. Riding that motorcycle, I felt as if we were defying gravity.

That was many years and many helmet styles ago. The one I am wearing today has a shell made of Kevlar and fiberglass, which is really the important point right now, as I watch the convertible coming toward me take the inside curve too fast and cross over into my lane. Even over the roar of my chopper, the first and only bike I've ever customized on my own, I can hear the car's tires skidding across the rumble strip that's been carved beneath the double yellow lines. I swerve in the outside lane, and although it feels like slow motion, it's all happening very fast and suddenly it’s just me, the car and the guardrail. I make a desperate effort to squeeze between a rock and a hard place but it's no good – the front wheel of my bike gets pinned and I'm thrown from the seat.

I'm flying through the air. I know I just flew over the handlebars, but I have no idea where I am going anymore.