I'm really starting to enjoy hosting other authors on my blog. Chocky bikkies, anyone? <= That's me being Australian for the day, in honour of: 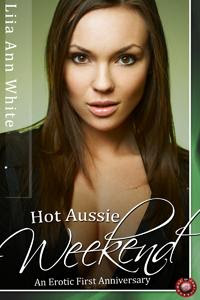 Blurb
Newlyweds Jaycee and Campbell are stressed. Constantly working, trying to
set up a secure future for themselves, they rarely spend time alone, enjoying
each other’s company.
So, to celebrate their first anniversary, Campbell whisks away his wife on a
romantic getaway where he plans to pamper her and lure her into the ultimate
relaxed state. But what is his ulterior motive? What secret has he been
keeping from his new wife?
Whatever it is, it’s guaranteed to be a weekend full of eroticism, love, romance
and some surprises on a Hot Aussie Weekend.
Excerpt
Complying, she frowned and wondered why she’d be tempted to
pleasure herself. Suddenly the skin on her breasts tingled. The mounds felt
swollen and tight, nipples peaking to an almost painful point. Letting out a
small cry, she looked down her body to see a wicked grin on Campbell’s face
as he nipped the underside of her breast.
“What did you use?” She was suddenly breathless. “What is that stuff?”
“Arousing massage oil,” he mumbled against her stomach as he
worked his way down her body. His hand gently massaged her mound and,
sure enough, seconds later, her pussy burned with arousal.
“Oh fuck,” she groaned and threw her head back on the pillow.
Every nerve ending was on fire. Her body ached to be touched,
but Campbell withdrew his hands and sat back on his knees, apparently
admiring his handwork. Clenching her hands into fists under her head, she
let out a moan of frustration. Her skin tingled, breasts heaved as her breaths
increased.
“Cam, please,” she panted.
He didn’t respond. She looked up and found him wiping his hands on a
wet face washer. When he leant down again, he blew gently on her mound. It
reignited the fire that burned within her.
“Please,” she whined, writhing. Now she understood why he told her
not to touch herself. Right now, she was about to take matters into her own
hands.
Campbell’s head disappeared from her line of vision and she closed
her eyes as his fingers touched her folds. Cool air hit her heated pussy when
he opened her, causing her clit to throb even harder than it had been. A soft,
gentle stroke from his tongue pulled a guttural moan from Jaycee’s mouth.
She bit down on her lip and focussed on the sensations his tongue was
causing.
His tongue ceased movements and disappeared, only to return to
her breasts, where he licked and sucked her to the edge of orgasm. Just by
touching her breasts. Fuck. That had never happened to her.
Two fingers pressed against her entrance and Campbell pulled them
up, spreading her moisture around her clit. Slow, lazy movements only made
her more aroused.
“I swear, Cam,” she panted. “If you don’t get on with it, I’m going to
push you off the bed and finish myself off.”
She caught a glimpse of his smirk just as he thrust his fingers into her
pussy. Throwing her head back, she moaned at the welcome intrusion. Fuck,
he knew what he was doing. His fingers curved inside her and instantly found
that place that drove her wild. Coupled with his suckling and caressing her
breasts, she took mere seconds to come.
“Come for me, honey.” Campbell murmuring in her ear sent her
spiralling over the edge.
Buy Links
All Romance eBooks - http://www.allromanceebooks.com/product-
hotaussieweekend-720064-144.html
Amazon – http://www.amazon.com/Hot-Aussie-Weekend-ebook/dp/
B00794L608/ref=sr_1_5?ie=UTF8&qid=1330420295&sr=8-5
Amazon UK - http://www.amazon.co.uk/Hot-Aussie-Weekend-ebook/dp/
B00794L608/ref=sr_1_1?ie=UTF8&qid=1330437007&sr=8-1

Posted by Giselle Renarde at 3:14 PM