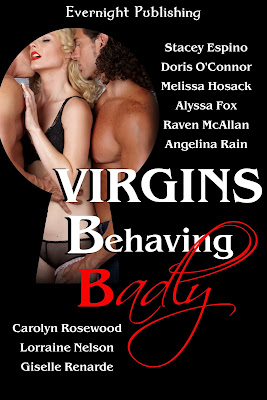 In one of those Amazon community chats, I just happened upon a reader who was looking for stories with a virgin hero. Thankfully the topic was labelled as "authors welcome" so I got to do a little self-promotion, because the first story that came to mind was the one I wrote for a brand new anthology called Virgins Behaving Badly.
I haven't peeked inside just yet, so I'm not sure what the split is like of stories with virgin heroes versus virgin heroines, or stories where both (or ALL) characters are virgins, etc. Alls I knows is my "Mutual Drive" is an interracial story about an older woman falling for a younger man while he's housesitting for her neighbours over the Christmas holidays.
Actually, I wrote this story while I was housesitting for a friend whose home does indeed have a "mutual drive" (a driveway that's shared with the neighbouring house) and that's what sparked the idea. Yes, it's an ode to my friend's driveway. People are always asking "Where do you writers get your ideas from?" so there you go. Endlessly fascinating, I know, I know. Such a glamorous life I lead.
Anyway, Virgins Behaving Badly is out now. Looks like it's selling really well at ARe and Amazon, so I guess virgins have a certain appeal. :-)
You can read more about this book or buy it from:
Evernight Publishing: http://www.evernightpublishing.com/virgins-behaving-badly/
ARe: http://www.allromanceebooks.com/product-virginsbehavingbadly-759902-146.html