So, I've mentioned I have stories included in some of editor Barbara Cardy's new "Lesbian Erotica" mini-anthologies (published by Robinson--the "Mammoth Book of..." people), but I don't think I told you I contributed to the "Erotica" series as well. 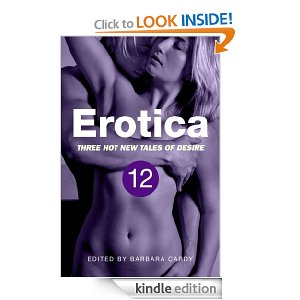 Erotica, Volume 12: Sex in Public / Voyeurism / Master and Slave / (a Mammoth Erotica Short) includes my story "The Big Reveal" which is one of those cute and funnies that also happens to be full of public sex:

Product Description
LIGHT REFRESHMENT by Dita Darker
When her car breaks down during the hottest day of the summer Faith Ellis is forced to take a slow train to her destination. Realising too late that she has left her purse at home she is saved from the humiliation of being thrown off the train by a handsome stranger. But how will she be able to repay him?
GERTRUDE by M. Christian
Quite naturally, his neighbours didn't like Beethoven blasted out at full volume, so our police officer heroine is sent to deal with what should have been a routine noise complaint. Noting some rather rude magazines and a well used whip, she's asked if she likes to play . . . Now, assaulting a police officer would normally get you into an awful lot of trouble . . .
THE BIG REVEAL by Giselle Renarde
A romantic, but very sexy story for Marisa and Tariq. Falling in love at first sight (although both have very different versions of when that was) and with their first baby on the way, Marisa's hormones are soaring, in the elevator, in the park . . . Will Tariq ever be able to satisfy her needs . . .

This mini anthology is only $0.99. Seriously!  You can't lose.
Hugs,
Giselle
Posted by Giselle Renarde at 3:27 PM