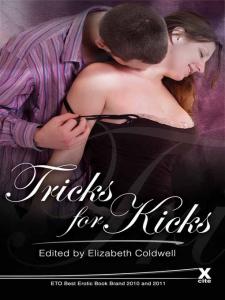 I'm really bad at keeping track of when anthologies come out.  Apparently (according to the Amazon page), Tricks for Kicks was released over a month ago.  Well, I guess I slept through April, because I didn't know.

Ever had the urge to pay for your thrills? The characters in this collection have, but it’s not just money that changes hands when these lovers go all the way. Pimps and prostitutes, gigolos and gold-diggers are all to be found enjoying Tricks For Kicks. And let’s not forget the boys and girls of the vice squad, whose intentions are often just as dishonourable as the hookers they’re arresting.

From girls who’ll do anything for that special piece of jewellery to the confessions of the woman running the best little whorehouse in town, here are twenty tales of sex for money – and other benefits.


So that's what this anthology's all about.

But here's what a duh-duh-duh I've become lately: I looked this antho up on Amazon, and as you'll notice, my name isn't listed under authors.  So I was like... wait, did I contribute a story to this book?  I think so... YES, because they PAID me... so I guess they ran out of space under authors (maybe there's a limit to how many they can add on the Amazon page, I don't know) but it was still driving me nuts that I couldn't for the life of me remember WHICH story of mine was included.

This happens all the time these days.  Somebody mentions an upcoming Cleis or Xcite antho and I think "Oh yeah, I have a story in that" but do you think I can remember off the top of my head what story of mine appears in it?  It's bad!  I have to look it up every time.

Mercedes and Simon's sex life was never this good back when they were a lovey-dovey couple.  Now that he's paying her for the pleasure, Simon knows what he wants and isn't afraid to demand it.  Mercedes kind of detests his entitled arrogance, but it arouses her to no end.  When Simon muses that he always wanted to see Mercedes with bigger boobs and insists she fill her camisole with two giant water balloon, she does as she's told.  When she sees herself like that, with humungous fake breasts, and feels their warm pressure against her flesh, she's ready for anything.


To make a short story long (as my aunt always says), Tricks For Kicks DOES include my story Show No Mercy, and the anthology is available now from Amazon: http://www.amazon.com/Tricks-for-Kicks-ebook/dp/B007SWXZMS/ref=sr_1_1?s=digital-text&ie=UTF8&qid=1337192917&sr=1-1