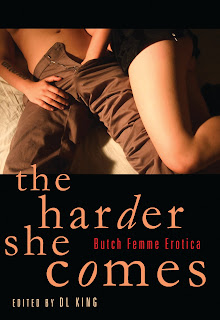 First off, my thanks to Giselle for hosting me today! I think it’s especially fitting because, you know, she’s Canadian and I’m Canadian, and the Butch Femme Salon that’s the setting for my story Speakeasy is right here in my backyard (so to speak) in downtown Toronto.

When I saw D.L’s call for submissions, it didn’t take me long to figure out what I wanted to write. As far as inspiration goes, the awesome folks who organize the Salon and the equally awesome folks who attend the events provide it in spades. They’ve had themes ranging from Film Noir to Nerds & Jocks, from Leather & Lace to Fit for Duty (they’re on facebook – you should look ‘em up). And while my story is a work of fiction, I remember walking through the doors of the roaring ‘20’s edition of the Salon, and this much, at least, is true:

It feels illicit, even though it’s not. It feels like secret passwords and shady alleys, like I’m crossing the threshold into a throwback blending of a prohibition era speakeasy and a lesbian bar from the ‘50s. But even that doesn’t begin to describe the deliciousness of a scene where every masculine-of-centre flavor imaginable – butches, Daddies, papis, studs, aggressives, trans-folk and bois – are all dressed to the nines in their suits and ties, their wingtips shined and their fedoras creased just so. It’s enough to make a femme heart flutter.

It did, it does, and all of the stories in The Harder She Comes: Butch/Femme Erotica, will make your hearts (or other parts of your anatomy) flutter too. I’ve got my favourites, and in an anthology that showcases so many tremendous writers, you’ll no doubt have yours. So pick up a copy – you really, really should.
Here’s another excerpt from my story:
There’s a single unoccupied black leather armchair tucked deep into the shadows in the corner of the room, and Jay leads us unerringly toward it. Somehow I’m not surprised; although every other space is occupied, she strikes me as the kind of person who is used to having whatever she wants, whenever she wants it, and I thrill at the thought that right now, she wants me.
Jay sinks into the soft leather, looking up at me with an enigmatic smile. I dither a little bit, because I’m not entirely sure how I’m supposed to arrange myself across her lap. No matter what she may think, this isn’t something I do every day, let alone in front of an audience.

“Why don’t you straddle my lap, babydoll?” She says, and a blush steals into my cheeks, though I know she can’t see it in the low crimson light. I cast a glance around the room; there are three or four other couples kissing and petting on the sofas, and no one’s paying us the slightest attention.
“Don’t you worry about them baby,” she says, “they’re not worried about us.”
She’s right, and I know it, and she looks so goddamned sexy sprawled in that chair in that moment that I don’t think it would matter even if every eye in the room was on us, I’d still do exactly what she wanted me to do.
My knees sink into the warm leather on either side of her hips and I lower myself delicately onto her, all too aware of the heat emanating from between my thighs and the substantial bulge tucked into her well-tailored pants. This Daddy has come to the party packed and ready to play, and I stifle a moan against her shoulder when her hands settle on my hips and guide me more firmly on to her just as she rocks her hips upward beneath me.
“You see what you do to me, babydoll?” Jay whispers in my ear, her tongue swirling around the sensitive shell and then retreating, sending shivers down my spine. “You made your Daddy all hard.”
Jay’s hands are on the move, rounding the curve of my ass, squeezing tightly, venturing lower, to where my ass meets the tops of my thighs, and where the hem of my short flapper dress has come to rest. There’s an inch of creamy skin exposed above the tops of my garters, and Jay groans as she discovers both the flesh and the stockings.
“You’re a dirty little girl, aren’t you Evie?” Jay’s mouth is just beneath mine, and I have an almost obsessive need to kiss her, but I wait, like a good girl, while she strokes me with her hands and her words.
“Dressed up all nice and pretty on the outside, but underneath…” Oh fuck, I want to kiss her so badly… “Underneath, you’re just a little slut, aren’t you?”
My pussy feels heavy and swollen, engorged with blood and slick with the need to be filled.
“Hmm?” She’s prompting me.
“Yes…” Oh God, yes, I feel like a slut.
“Yes what?” She’s going to make me say it.
“I’m a slut, Daddy.” Why does it feel so much dirtier to say it out loud? “ I’m your slut, Daddy.”