Why Are There Boobs On My Gay Erotica? 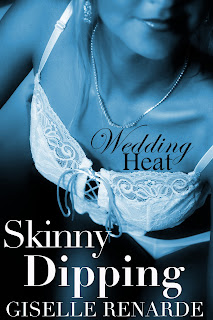 Will I be kicking myself for that decision?  Will readers be kicking me?  (Do you want to kick me right now?)

Only time will tell.

While we're waiting, want to read the blurb and excerpt from Wedding Heat: Skinny Dipping?

Forget the happy couple—it’s the guests that make this wedding sizzle!

Joey’s a virgin.  That’s not the sort of thing he’d admit to most people, but when he meets Greg at his cousin Maggie’s luxury woodland wedding retreat, he finds himself freely admitting to this embarrassing quality.  Joey and Greg hit it off right away, teasing and taunting each other, but when Greg casually mentions that he’s gay, Joey isn’t sure how to react… not until a bunch of the guys strip naked for midnight skinny dipping in the man-made lake.  Something tells Joey he won’t be a virgin for long!

“What about you?” Greg asked.  “You ever knocked a girl up?”

“Yeah right.”  They very idea made Joey laugh.  “Not even close.”

“Yeah.”  Joey would have lied to anybody else, but there was something about Greg, maybe just the fact that he was gay, that made it easy to be honest.  “Are you?”

“What do you think?”

Something touched Joey’s dick underwater, and he jumped, squealing like a little kid.  “Oh my god, what was that?”

“My hand, you dumb fuck.”  Greg shook his head, and Joey laughed, feeling like a total idiot.  “No wonder you’re still a virgin.”

This time when Greg found his cock underwater, Joey didn’t squeal or squirm.  He turned to face Greg, holding the guy’s shoulder to steady himself.  When Greg wrapped a fist around the base of his shaft, his thighs and ass muscles tensed.  His breath staggered now, rattling in his chest before bursting past his lips.

“I’m not really…”  Joey stopped himself, trying to figure out what he wanted to say.  “I mean, it’s not every day I’m attracted to someone.  I’m not like that.”

The way Greg nodded, it seemed like he understood better than Joey did.  God, it felt good the way Greg stroked his dick—firm, hard, forceful but not rough.  Rough would come later.  Joey always liked to work up to the ultimate sensation.

There are lots of places you can buy Wedding Heat: Skinny Dipping RIGHT NOW, like:

You can also keep an eye on the Wedding Heat website for updates and stuff: http://weddingheat.wordpress.com/

Posted by Giselle Renarde at 2:24 PM