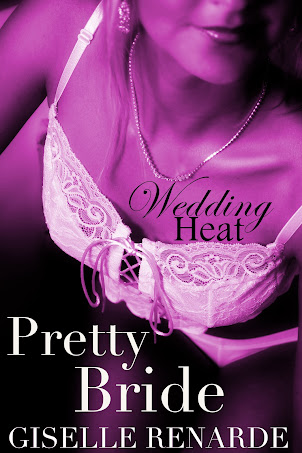 Where to begin, where to begin?
Well, PRETTY BRIDE, which was formerly titled "Wedding Heat: Pretty Cousin" is now available.  I guess it's best to start with the basics.
Pretty Bride is the fourth story in the Wedding Heat series, but it was actually the FIRST story that came to mind when I conceptualized this series.

Because... okay, well... a lot of people have crushes on their cousins.

I definitely have one cousin I was a little sweet on at one point in life--not that I would ever have acted on it, and she's straight anyway, but fantasy is a huge driving factor in erotica.  I wouldn't surrender to temptation the way Vanessa and Maggie, but I sure as hell enjoyed writing about it!

The last thing I want to mention before sharing the blurb and an excerpt from PRETTY BRIDE is that, because this title falls into the "pseudo-incest" category (the girls are not blood relatives), it will not be available from ALL the usual vendors.  Most e-tailers don't allow this sort of content on their sites.  You can check out a preliminary list at the end of this post. 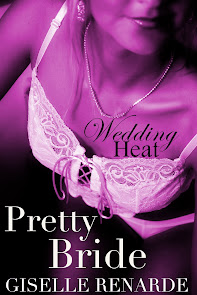 Vanessa’s had a crush on her cousin Maggie since before she knew what love was. They were inseparable growing up—that is, until Vanessa came out as lesbian. That confession sparked a rift between the girls that stretched out more than ten years.

Two days before her wedding, Maggie meets up with Vanessa for the first time in years. Will Vanessa give in to her lust and try to seduce Maggie so close to the wedding? Or will Maggie give Vanessa no choice?

Vanessa spoke so softly she could barely hear her own voice.  Shaking her head, she let her gaze wander the length of Maggie’s naked flesh.  God, what a body!  Maggie’s thighs were like cream, two milky paths culminating in pinkness hidden beyond a trim strip of hair.

“Can’t what?” Maggie whined, reaching for the soap dish indented in the shower wall and pulling herself to standing. She opened the tiny bottle of shower gel and drizzled it across her breasts.  “You can’t wash me?  You can’t just wash me?”

The way Maggie said that word, wash, made it seem like not such a big deal.  Still, Vanessa fought with herself: should she let go and abandon her good sense, or obey moral law and fight her urges and Maggie’s advances?

Maggie didn’t give her much choice.  Grabbing Vanessa’s sopping shirtsleeves, the girl pulled her in for a kiss. She didn’t even see it coming.  Her mind was clouded, hazy, lost in the heady sensation of Maggie’s tongue whipping around her mouth.

Moaning, Maggie pressed her big breasts against Vanessa’s front.  They writhed together under the shower’s hot flow as the mango-scented body wash began to froth between them.  In the midst of their frenzy Vanessa felt the tiny bubbles working their way through her undershirt and popping against her nipples.  The sensation defied description.  All she wanted was more.

Vanessa hesitated for an instant, assuring herself that Maggie wasn’t really her cousin, and then ran her hands across the supple length of the girl’s waiting flesh, tracing the perimeter, exploring all the boundaries.  “I want to lick your pussy so bad, Mags.”

“Do it.”  Maggie’s voice was tight and high, like she was so desperate for this to happen she could barely speak.  “Do it now!”