When in Rome by Lucy Felthouse

I've found that the longer I've been writing, the more I find inspiration in the strangest places. And sometimes the inspiration doesn't strike me until much later. My story in Smut in the City is a perfect example of this.

I went to Rome back in May for the first time. I fully expected to come home with some ideas for stories, and given I needed to get my story written for Smut in the City when I got back, then that was perfect. What I wasn't expecting, however, was for the inspiration to come from the Colosseum. It's an absolutely awe-inspiring place, but it's so busy and crowded that getting up to anything sexy would grant you a large audience of onlookers and possibly some time spent in an Italian jail.

And voila, Within the Crumbling Walls was born. Now, I know my ideas are sparked by unusual things, but I think a metal barrier has got to be the strangest. 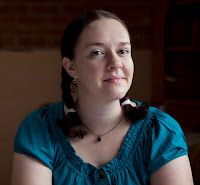 Lucy is a graduate of the University of Derby, where she studied Creative Writing. During her first year, she was dared to write an erotic story - so she did. It went down a storm and she's never
looked back. Lucy has had stories published by Cleis Press, Constable and Robinson, Decadent Publishing, Ellora's Cave, Evernight Publishing, House of Erotica, Ravenous Romance, Resplendence Publishing, Sweetmeats Press and Xcite Books. She is also the editor of Uniform Behaviour, Seducing the Myth, Smut by the Sea and Smut in the City. Find out more at http://www.lucyfelthouse.co.uk.
Join her on Facebook and Twitter, and subscribe to her newsletter at: http://eepurl.com/gMQb9
Posted by Giselle Renarde at 10:09 PM