The Lesser Blessed and Me Without My Camera 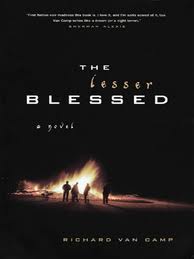 I've lived in Toronto for more than 30 years and never attended the film festival until yesterday.  It's a big thing, the Toronto International Film Festival.  Glitzy, glam-y, red carpet-y, celebrity stuff.  Not really what I'm into, myself.  I wouldn't recognize most Hollywood personalities if I tripped over them.

But this year I had a reason.  There's this author, Richard Van Camp, who lives in the Northwest Territories.  (For my international readers, Canada is comprised of 10 provinces and 3 territories.  The territories are on top.)  I first encountered Richard Van Camp's writing in an anthology called The Exile Book of Native Canadian Fiction and Drama.  When I started a tweet about how much I enjoyed his story, I stopped for a sec and thought, "Hey, maybe he's on twitter."  Sure enough, he was, and we became fast twitter-friends.

Anyhoo, when Mister VC tweeted that the film adaptation of his book The Lesser Blessed was coming to TIFF, I knew I had to see it.  The first screening took place Sunday September 9th at Isabel Bader Theatre, where I happened to have attended classes back when I was a student at Victoria College.  The world gets smaller by the day, I tell you. 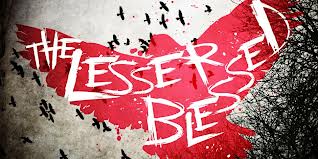 I guess I didn't realize what a REALLY BIG THING this was.  For some reason, I thought The Lesser Blessed had premiered already, somewhere else.  Okay, I was wrong.  This screening was the world premiere.  When I got to the theatre and saw people in tuxedos and shiny gowns, I kind of went... damn... I should have dressed up a little more.  I DIDN'T wear my usual dirty cargo pants and ripped hoodie, but even so, I felt notably underdressed.

I also didn't expect to see STARS!  I'm talking MY kind of stars, the kind I WOULD realize if I tripped over them, actors like Tamara Podemski (and am I crazy or were there other Podemskis on site? Maybe I was seeing double, I don't know.)  It kind of made my knees wobbly, seeing filmmaker Anita Doron on the red carpet in her lovely blue gown (that I don't have a picture of because I didn't bring my damn camera!)  Everything felt dreamy, like stuff you see on TV but never experience in real life.

So, the next question I've almost forgotten to answer is: "How was the film?"  Well, it was amazing and it made me cry more than once.  Thank goodness I found some tissues stashed in my pocket, or I would have been wiping my nose on my shirtsleeves.  I'd love to give a more in-depth film analysis, but unfortunately I spent the entire course I took with Professor Bart Testa mooning over the silver sexiness of Professor Bart Testa, so I didn't absorb all that much.

The Lesser Blessed is the type of movie that gets called "gritty" because it's such an authentic portrayal of the human experience and human emotion.  It is exactly the kind of film I love: engaging, raw, suspenseful, and beautifully acted by a cast that stretched from Benjamin Bratt and Kiowa Gordon to newcomer Joel Nathan Evans, whose performance was stunning.

During the Q&A after the film, the director told the story of casting Joel in the leading role.  They wanted to find a teenaged actor from the Northwest Territories for the lead role of Larry, so they set off on a little road trip and had open auditions in high schools across the territory.

In Richard's hometown of Fort Smith (if I'm not mistaken), the place upon which the fictionalized setting of the film is based,  they held their audition and nope, no luck.  As director Anita Doron walked through the halls of this high school, she passed by a tall, lanky boy who was making everybody laugh, and she knew she'd found her Larry.  "He didn't come to the audition," the director told the audience.  "He had a math test.  He didn't care."

My highest accolades go out to this production and everyone who worked on it, cast, crew, and creatives.  If you're in or around Toronto, there's another screening tomorrow, Tuesday Sept 11 2012: http://tiff.net/filmsandschedules/tiff/2012/lesserblessed  Check it.

I also want to say that TIFF volunteers are super-awesome and treat patrons like royalty.  Thanks for your devotion and time, volunteers!