I Dream of L.A. Brothels, Violet Blue, and Professor Snape the ManWhore Too!

Often, I share my dreams (as in night dramas, not aspirations) on Twitter, but this one's too involved for 140 characters, so it gets its own blog post.  Why do I think other people are interested in my dreams?  I don't.  They're just weird and they say more about me than I could say about myself.

Anyhoo, last night I dreamed that my mother's office moved to L.A. and she invited me out there, saying that there was a receptionist post available.  So I went, la-dee-da, and it turned out the "receptionist" job was more like "brothel madame."  Apparently, the company's lawyers moonlighted (except during the day... daylighted?) as MANWHORES and, yes, you guessed it, one of the dudes was Professor Snape.

Despite my waning (almost extinguished) sexual interest in men, I would mow down my grandmother for a chance at Professor Snape.  The Harry Potter character.  Not Alan Rickman, who is cool and stuffs, whatevs, but Snape is WOW.

So now I'm a madame in a brothel served by Snape, and I'm thinking, "Dude, all it takes is $40 (forty dollars!!!) and he can be MINE ALL MINE!  Mwahahaha!"  In the meantime, as I'm struggling to learn my new job (which consists of greeting female patrons at the office lobby and bringing them to the lawyer-manwhore suites), I meet a lovely, curvy, funny girl who's arrived for her appointment. 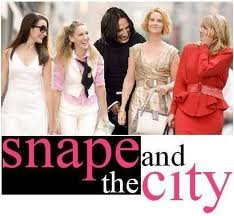 When she's done using and abusing my Snape, I meet up with her again.  I'm not usually instant-buddy-buddy with strangers, but we really hit it off.  It happens to be my lunch hour, so she takes me on a star-sighting tour bus with her good friend Violet Blue. (Wrong city, right state, so close enough?)

The tour is conducted by singers I can't understand, but I'm happy to see Violet.  She has paperwork for me: a hand-written introduction to Best Women's Erotica 2013.  Her writing veers from English to French and I laugh because I do the same thing (you should see my grocery lists--they're bilingual and often incomprehensible. Framberry. Concumber.).  I feel an instant sense of camaraderie with her, until she mentions something about her "husband" and then I suddenly feel like I've missed something.

Anyway, tour bus.  Right.  We only got halfway through the tour when the curvy girl and Violet said they had to leave.  At first I was thinking, "That's cool, I'll just stay on by myself," but then I realized I didn't know the city.  At all.  I felt overwhelmed and lost.  I couldn't even find my way back to the office on my own. I had to rely on other people.

When I got back to the office/brothel, everything seemed to be taking care of itself, so I took the afternoon off.  (On my first day?)  I kept thinking about Snape, and how easy it would be, how I should take advantage.  "Maybe tomorrow."

The next morning, I found out my precious had been mauled by some kind of vicious prostitute alien chick who'd bitten off his junk.  (Yeah, I said junk.)  When I visited him in hospital, Snape was a creepy little thing with a gash where his junk used to be. (Yeah, I said it again.)

I'd missed my chance.

I thought about Toronto, and I wanted to go home.  I couldn't remember why I'd decided to come to America in the first place.  I missed my country.

So that's that.  If you wanted a happy ending, you'll have to make up your own.  This one was forlorn and confused.  But that's dreaming for 'ya.

Hugs,
Giselle
Posted by Giselle Renarde at 1:07 AM