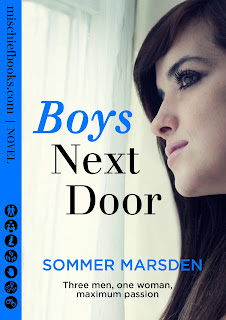 I just so happen to have an excerpt on hand from the inimitable Sommer Marsden.  The Book is Boys Next Door.  The burb is this:

Never in her hottest dreams did Farrell McGee expect a move to Tower Terrace to be such an erotic roller coaster ride.
"Good luck getting your key. I’m the middle house across the road should you need anything. At all," he said. The tone, the words, the accent on the anything. Oh god, he was one of those men. Men who had tons of self assurance and sexual prowess and total faith in their bedroom abilities. Those men were dangerous.
Starting over at twenty eight, Farrell McGee discovers sleepy Tower Terrace teeming with handsome men. Well, maybe not teeming, but three heart-stopping men do live across the road from her.
Despite feeling she's fallen backwards into a fairytale, complete with a big stone tower, a local legend and missing love letters, it becomes clear that all three of her neighbours have a sensual grip on her. She's powerless to choose just one, and just as powerless to get them out of her head or her bed. Deke, the devilish good boy who's superb at being bad. Coop, so often annoying in his gruffness, but oh so dominant where it counts. And Stephen the pretty, sweet, slightly submissive one. Her sex life has never been so good and her heart never so torn. She needs to choose one man, when she's not ready to give up any of them. But deep down she knows who she wants.

‘It’ll be okay,’ he said, pulling me back just enough that I brushed against him which helped me get my bearings.

He was warm against me, but I shivered.

‘Your hands are freezing. Are you claustrophobic?’

‘Not so much that,’ I whispered as if louder noise would make us plummet to our deaths. ‘I just don’t like elevators. How long? How long will we be here?’

I sighed. ‘The truth, though the smart money is probably on the lie.’

‘Probably half an hour to an hour. George has a good heart but slow hands.’

‘Great.’ I moved my hands around to try and find the railing that ran along the sides of the elevator. I didn’t think this poor man needed to be holding me like some damsel in distress. But what my fingers brushed was most definitely not the wall of the elevator. My hand froze.

‘Um . . .’ he said. And there was that dark and almost sinister laughter that somehow slid up my spine and under my hair and prickled my scalp like electricity.

A moment ticked by and I was afraid to breathe. I felt like I might laugh or cry or scream, or possibly all three at once.

‘But not enough to move it, eh?’ he asked, moving his body just enough that I felt the hard push of his cock to my hand.

My face heated with a blush. I was grateful he couldn’t see.

‘Shit. First I grope you and then I . . . just keep right on groping you. I don’t even move my hand. Have I mentioned the one thing that freaks me out is elevators? And a dark one that is being worked on by a slow man is the worst case scenario.’ ‘Hunh,’ he said and I could hear him smile.

‘And my hand is still on your cock!’ I blurted, finally ripping my hand away.

‘Hey, whatever calms you down, Farrell McGee.’

I couldn’t help but snort, but my hands were shaking and I felt a little light-headed.

‘It’s coming off of you in waves. It’s palpable. That’s hard to pull off. Palpable fear.’

‘I am nothing if not talented.’

‘Failed writer. But I am currently the butcher for our small town.’

‘Oh my God. I swear I’m not normally this stupid.’ I put my hand up to brush my hair out of my face, in the dark it felt like a million tiny spiders tickling my cheeks.

But I brushed over him instead – I was starting to wonder if it really was an accident – and he took my hand and squeezed it between his warm ones.

‘Breathe,’ he said. He put my hands flat on his chest and then placed his over the top of mine. I stood there, trying to calm down and feeling the steady and easy beat-beat-beat of his heart.

I took a deep breath and held it before blowing it out. The same way I did for stage fright.

‘Better?’ he asked, his face close, his breath smelling of mint.

‘You smell good,’ he said. ‘Like peaches and . . . I can’t quite put my finger on it.’ Deke leaned in and sniffed right at the juncture of neck and shoulder. My skin prickled almost violently. ‘Honey?’

What was I doing? My God, I had just met this man, had only seen him in the light for a few moments and now – if my nether regions were to be believed – I wanted him.

‘And what do I smell like?’ He put his hands on my lower back, splaying his fingers, spreading their warmth. He pulled me just a touch closer and though his cock wasn’t touching me, I felt – or imagined I felt – the energy from his hard on mingling with my own lustful energy.

‘Hunh. Good nose. I spent all day at a client’s fishing cabin, dressing a deer.’

For some odd reason, I imagined a deer in a skiing ensemble and snorted. But even as the laughter burst out of me, I pushed my pelvis to his. Brazen, but it was what I felt the urge to do. So I did it.

‘Dressing?’ I rotated my hips just a bit and his fingers brushed over my skin sliding lower to slip beneath the waistband of my jeans.

‘It means butchering. But don’t worry,’ he said, when I went a bit stiff. ‘I cleaned up real good and even had some coffee by the fire before I left.’

I let his tongue bully mine before I put my hands in that dark mussed hair I remembered and hauled him to me. Deeper went the kiss and when he bumped his erection against me so I could feel how turned on he was, I nipped his lip.

‘Shh. Kiss me,’ I said, rubbing my hand over his cock, squeezing his length through his jeans until he groaned. ‘I need to be distracted.’

‘I can do that,’ he said against my lips. Then he was turning me. A flipping, flying, falling sensation because of the darkness. My back ended up pressed to the wall of the elevator, my ass riding that metal bar I’d been searching out.

‘Touch me,’ I begged. I wasn’t sure where this new ‘me’ was coming from, but it was fine. She was okay by me.

‘I can do that,’ he echoed and his warm fingers ran down my belly, making me tremble.

His hand slipped below my jeans before plunging into my panties. Deke’s hot fingers found my clit and he pressed so that all my breath slipped out of me. Warm wet circles brought me close to an orgasm right off the bat. He was good.

I arched against him and kissed him again, finding his face – a bit rough with stubble – with my hands. I sighed again, arching up to meet his touch and he lazily slipped a thick finger into my cunt.

‘You’re so fucking wet, Ms McGee,’ Deke said against my throat. His teeth grazed my pulse point and he gently sucked that fragile skin until an echoing tug sounded in my cunt. My body tightened around his finger and this time we both groaned.