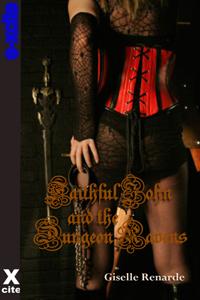 In this loose adaptation of the Grimm Brothers' tale Faithful John, the queen's untimely death leaves her son in charge of the brothel-like castle dungeon. Though her devoted servant, Faithful John, promised the queen he would keep the young man from the cursed Mistress Mei, nothing can divide royalty and young love. When the young king asks for her hand in marriage, she realizes her acceptance is a death sentence and says yes even so. Can Faithful John save Mistress Mei from her prescribed fate, or will his devotion see him turned to stone?

Faithful John paused at the foot of the stairs, turning to face the boy. “On her deathbed, your mother asked me to share this secret with you.”

“Is this a torture chamber?”

Walking ahead, the devoted servant pulled open a rich velvet curtain to reveal a scene the likes of which young Edward might never have conceived. On a thick lumber platform in the cold stone room lay a bald man. He was on his back, immobilized, his ankles tied to his wrists like a giant naked pig ready for roasting.

When the stunning creature securing the knots stepped out from behind the pig-man, Faithful John made the introductions. “Edward, meet Mistress Jasmina. Jasmina, our new King.”

Her full breasts bounced as she curtsied, a move that seemed to Edward excessively formal for a woman wearing only a leather half-corset. Mesmerized by the sway of her bronze tits with their dark, pointed nipples, he only noticed the polished wooden phallus she wore when she began petting it.

“Are you here to watch?” she asked. Her words were shaped formally, but syrup-sweet. “To assess my performance, perhaps?”

“I don’t know why I’m here,” he stammered, glancing quickly up at Faithful John before returning his drooling gaze to Jasmina.

“Not to be a bother,” the stuck pig spoke up, “but could somebody close the curtain? Rather drafty ‘round the nether regions, I should say.”

“Shut up, pig,” Mistress Jasmina commanded in a tone hard and firm. “I’m speaking with the king. Do you fancy yourself more important that the king?”

“No, Mistress,” he gushed. “I’m sorry, Mistress. Sorry, King Edward. My deepest sympathy, by the way, on the passing of your dear mother.”

“Shut up, you loud-mouthed swine!” she scolded. With a casual shrug, she said to Faithful John, “This is why I usually gag them.”

“I don’t understand any of this,” Edward intruded. “What has this man done to deserve such punishment? And what is that you’re wearing around your waist?”

A chuckle like grains of sugar glittered from Jasmina’s pink lips. “Such innocence! It’s rare, nowadays.”

“This place is a playground for people who find pleasure in pain,” Faithful John revealed.

The giddy excitement fell from Edward’s face, though not from his pants. “Why would my mother allow this?”

“She built it,” the servant replied.

Faithful John and the Dungeon Ravens is a BDSM/fantasy/historical/fairy tale type of story, and it's available from Xcite: http://www.xcitebooks.co.uk/Book/6314/Faithful-John-and-the-Dungeon-Ravens.html
Oh, and one thing I noticed about the site is that you can scroll down and on the left you can change the currency from pounds to US dollars, depending on what you've got to spend.  I think it's currently listed at only $0.99 or £0.65!