A FREE READ is always the answer...

All week, I've been stressing about what I would write today for Transgender Day of Remembrance.  Sometimes I just feel totally impotent when it comes to communicating the social challenges and actual physical dangers faced by trans people.

If you come here often, you know my girlfriend is trans.  We're kind of in the same blessed boat, though. We're really, really lucky--both of us.  I can't remember any major hate being thrown at me for being queer.  In my family, my sister's vegetarianism is miles more controversial than my queerness.  Nobody gives two fucks that my primary attraction is to women.

I've mentioned before that my Sweet isn't out with her family because she perceives that they would hate her forever, but that's not at all the reaction she's had from other people--inside and out of the LGBT population.  I don't want to downplay the mean-spirited remarks a few people have made to her, but I will point out that they are few and far between.  Like, you can count them on one hand.

This is not the case for many trans women. Not at all, at all, at all.  Trans women face harrassement and danger just walking down the street.  And I'm not talking about "other people in other places."  I'm talking even here in Toronto.  There's a term, "Walking While Trans"--police think they're entitled to stop you if they pick you out of the crowd as a trans woman.  Because if you're a trans woman, you are therefore a dirty, dirty whore and you deserve to be given a hard time.

And until more of the population wakes up to the fact that trans people are PEOPLE (just like...people!), we're just going to continue ignoring the all-too-frequent suicides and murders of folks who are trans and genderqueer.  Christ, we value animals over trans women.  Not that we shouldn't value animals--you know I'm a crazy cat lady--but I just don't understand how we can so wretchedly devalue human lives if they belong to people whose gender identity is deemed unnatural or dangerous or fucked, or whatever hateful rhetoric Sun Media and all those dicks are spewing these days.

Ugh... okay, I'm getting so mad I'm becoming incoherent, so let's move on. 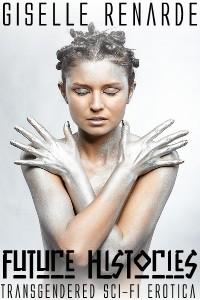 Today, in honour of Transgender Day of Remembrance, I'm offering my ebook Future Histories: Transgender Sci-Fi Erotica for FREE at All Romance Ebooks (btw, I know the word "transgenderED" is plastered all over that book and all I can say while remaining diplomatic to the powers that be is that I didn't put it there. Sorry!  Not my fault!)

Future Histories is a mini-anthology of 3 short stories featuring near-future transgender characters.  After everything I've written above, it might seem incongruous that 2 of those 3 stories feature sex workers, but... well, read the stories and make your own decisions about whether or not these characters represent heartfelt portrayals of genuine people.

After all, just for today, it's free:

Posted by Giselle Renarde at 12:57 PM