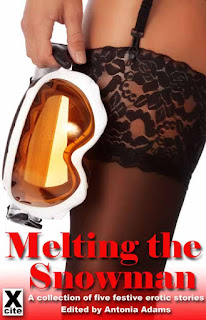 I saw this e-book advertised in the All Romance newsletter yesterday, and I thought to myself "Nice Cover!"  It wasn't until this morning that I realized Melting the Snowman is a Christmas anthology and I've got a story in it!  That was a nice surprise.

My story in this collection is called "Head to Mistletoe" and it's... wow, okay, it's kind of insane.  It's about an open-minded couple and their open-crotched mistletoe novely underwear.  When they wear their skanky undies to a Christmas party, what should break out but spanking, exhibitionism, public sex... you name it!

Melting the Snowman by Josie Jordan

Carrie Mason is a freestyle snowboard coach and she loves her job, especially as her current client is the gorgeous JJ Green – having to rub down his near-naked body at the end of every day is a lesson in self-control. Unfortunately, the way he’s performing at the moment, his sponsors are going to dump him and she’ll be out of work. That is unless she can somehow melt his frosty exterior and unleash the passion that simmers beneath.

Head to Mistletoe by Giselle Renarde

When Jess and Lars wear their novelty mistletoe underwear to Stone and Ravinia’s Christmas party, they’re bound to show it off. Lars starts the naughtiness by spanking Ravinia in her sexy Santa Girl outfit. Jess dares him to reveal his mistletoe and Lars agrees – but only if she shows hers too … in front of everyone!

All I Want for Christmas is… by Kay Jaybee

Cinderella Gets her Prince by Adam G Wright

He’s behind you … oh yes he is! A strait-laced academic in her everyday life, Fiona acts out her passions on stage. And now she’s been cast as Cinderella in her drama society’s pantomime, she’s planning to seduce Prince Charming – played by her long-time heart-throb, Gareth. If her strategy succeeds, she’ll get a taste of what’s inside his tight white breeches, sauced with vengeance for past wrongs. How will her prince react when he discovers that Cinders isn’t as innocent as he assumed?

Naughty … and Nice! by Tony Haynes

Every Christmas Eve, Sandra, the boss at Sinful Sex Toys, turns her office into Santa’s Grotto and lets her staff take their pick of the naughty Christmas gifts on display. As everyone heads home for the holidays, she finds herself alone with Callum, the sexy-smooth new boy on the team. And a flirty, festive kiss promises to turn into something far more passionate beneath the mistletoe …

***
So if you're in the mood for some holiday erotica, check it out.  Melting the Snowman is brought to you by the fine folks at Xcite and available from:

Posted by Giselle Renarde at 12:58 PM