The Political is Personal #IdleNoMore

Until now, I've been quiet about my heartfelt alliance with the Idle No More movement.

For those worldwide readers who may not be aware of the goings-on in Canada, I won't paraphrase.  Instead, here's a quote from the mission statement from the Idle No More website:

Idle No More calls on all people to join in a revolution which honors and fulfills Indigenous sovereignty which protects the land and water. Colonization continues through attacks to Indigenous rights and damage to the land and water. We must repair these violations, live the spirit and intent of the treaty relationship, work towards justice in action, and protect Mother Earth. 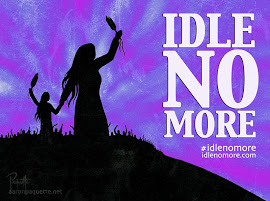 You can read more here: http://idlenomore1.blogspot.ca/p/blog-page_11.html

As you may or may not know, Attawapiskat Chief Theresa Spence is well into a hunger strike our Prime Minister Stephen Harper has chosen to ignore. All she's asking is to meet with the PM, the governor general (who acts as the Queen's representative here in Canada), and Ontario's Premier, to discuss Aboriginals affairs, treaty matters, and environmental issues.

They are ignoring her requests for a meeting.

There are others around the country who are now fasting in solidarity, including 10 women in Regina, who began their hunger strike yesterday and will fast, I believe, until December 31st.

Today I'm joining those women, fasting in alliance and solidarity with the Idle No More movement. (Hello from Toronto!)

I actually didn't want to blog about this matter. I just wanted to do it.  The only person I'd planned on telling was my girlfriend, who expressed her full support for the cause, but worries about my health.  To be honest, I've been suffering blood loss and anemia lately due to a medical concern.  Not eating probably isn't the best idea, but this is something I need to do, personally.

The reason I'm telling you about it is that my personal reasons for the fast are intensely political, so if I don't come out and explain what I'm doing and why, it has no political bearing beyond my own mind.

Stephen Harper does not speak for me.  I never voted for him, and his weighty silence does not carry my voice.  I stand in solidarity and alliance with the Idle No More movement, and I urge the Prime Minister, Premier, and Governor General to meet with Chief Theresa.

That's my voice.  I'm speaking with my hunger.