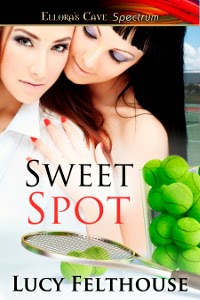 Actually, the answer to this one is super easy. It’s all Lily Harlem’s fault. My good friend and fellow writer is probably best known for her Ellora’s Cave series, Hot Ice, which is about hunky ice hockey players. I’ve never even watched ice hockey and I love those books.

Anyway, we chat rather a lot and one day we started batting (if you’ll pardon the pun) the idea of co-authoring around. Lily had co-authored before and enjoyed the experience, and we felt that our writing styles would complement each other. We were both up for it and put it on our to-do lists for when our current projects had been put to bed.

Then, out of the blue, I got an email with a chapter attached to it. Lily was apologetic, saying she knew we’d decided not to start our book yet, but the scene had just popped into her head. I read it, and was immediately hooked. The premise, the characters, the setting. There was only one drawback – it was about a male tennis player and a psychologist. I know very, very little about sports in general and honestly, the only sport I genuinely enjoy is motorbike racing. But Lily quickly reassured me it didn’t matter—we’d write a damn good story and she, as a sports fan, would help me out where necessary on the tennis-y parts of the book. I agreed, and within five weeks we’d completed the first draft of our manuscript, titled Grand Slam. It was an incredibly fun and exhilarating experience, and along the way we’d idly mentioned that we could actually continue with a series. And so Raw Talent was born—a sports romance series. We’d keep it loose, not necessarily only writing about tennis, and not always co-authoring.

So when Ellora’s Cave put a call for submissions out there for lesbian romances for their Hot Pink range, I gave it some thought and decided it would be the perfect opportunity to add another book to the Raw Talent series. One of the characters, Nadia Gorlando, had already appeared in Grand Slam, and the action in Sweet Spot actually overlaps with it slightly. Then, of course, it goes off at its own tangent and a story all its own. I only had a basic idea of what I was going to write, but in the end the novella pretty much penned itself.

I love the versatility of series books already. Grand Slam and Sweet Spot are linked, they have some of the same characters, and yet they’re very different books. They can be read one after the other, or they work perfectly well alone—it’s totally up to readers and what genres and subgenres they like.

Happy Reading,
Lucy x
*****
Excerpt:
Nadia Gorlando and I had just gotten off the exercise bikes in the gym when one of the academy’s coaches, Peter Ross, headed over to us, all smiles.

“Hey, Nadia,” he said, his all-American grin widening and his blond hair flopping down over his forehead, “I need a huge favor.”

I flicked my gaze to Nadia. She raised one of her perfectly shaped eyebrows and waited for him to continue. He did.

“I totally lost track of time just now and I have an appointment with Travis Connolly. Would you mind wiping down my machine for me? Or maybe stick a note on it saying it’s out of order? I don’t want to leave it all sweaty for someone else. You’ll be doing me a real solid. I’ll owe you.”

My jaw almost hit the floor.

Now Nadia rolled her eyes, looked over at the offending machine, then back at Peter. “Sure, I understand,” she said, as cool as ice. “The world’s number one can’t wait. Go right ahead—I’ll fix it for you.”
He babbled a load of thanks, then jogged out of the gym.

Nadia chuckled. “Of course not. He may be coaching Travis Connolly and Rufus Lampani for the US Open, but that doesn’t mean I’m going to clean up his mess.” She pointed with her chin over to the machine Peter had just vacated. “Come on, V, I’ll show you how I’m going to deal with this.”

I followed her, grinning. Her tone told me that it was going to be something fun. Well, for us, anyway. Probably not for Peter.

Sure enough, when she returned from the room off the side of the gym, she had a pad of paper and a pen in her hands. Deliberately shielding the pad from my view, she wrote something down, then pulled off the top sheet. Folding it, she then propped it on the sweat-slicked seat so the writing was on view to anyone who happened past.

When I’d read and absorbed the words, I turned to Nadia, impressed. Her smile lit up her face, showing dimples in each cheek, and her brown eyes gleamed with amusement.

It was in that moment that I decided I had the serious hots for Nadia Gorlando.

PLEASE EXCUSE THE STATE OF THIS MACHINE. PETER ROSS, TENNIS COACH SUPREMO, “LOST TRACK OF TIME”.
*****
Blurb:
A Raw Talent book.
Virginia Miller is an up-and-coming tennis star. She’s gone from a ratty tennis court in a park in south London, England, to the world’s top training facility—Los Carlos Tennis Academy in California. In awe of the talent around her, Virginia is all the more determined to make the most of the opportunity and show that she’s worthy of her place there. Her mentor, Nadia Gorlando, has every faith in her.