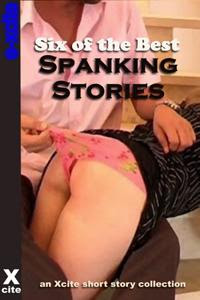 For readers who enjoy spanking erotica, Six of the Best Spanking Stories is a must-have!
Corrections by C. Margery Kempe

Simon had worked for Dr. Kettering for six months and he still couldn’t quite figure her out. It wasn't that she was cold or withdrawn; quite the opposite, in fact. She was also gorgeous, tall with curly auburn hair and striking green eyes. Every move had grace and poise, even if she was a trifle distant. Safely at home, he had fantasies of her exposing a vulnerability to him. But he couldn’t have been more surprised on that rainy Friday afternoon when she asked, "Can I share a secret with you, Simon?" because her fantasy, was also his.


The Credit Crunch By Congressio

‘If ever the estate makes a loss, I will punish you severely, darling!’ That’s what his wife had threatened and he had no doubt she would carry out her threat. The question is not, can he withstand the punishment she deems fitting, but does she have another motive for spanking him?


Who’s The Boss? By Simon Asquith

Despite being a smart career girl with a good head on her shoulders, Rachel has always found job interviews to be something of an ordeal. This time however, she may get more than she bargained for. Behind closed doors, authority is everything, and a degree of role-playing can be a fun and revealing experience. But executive power games can go too far between a man who’s used to being obeyed, and a woman who knows exactly what she wants. In the end, strict disciplinary procedures are brought into play. But will the tables be turned before everyone is fully satisfied?

It was the kind of set-up a butt-loving PI just couldn’t resist: a big-bootied babe lounging poolside, bottoms-up. So, he took the bait, sinking everything he had into the plush richness of the woman’s rear end. But temporary ecstasy soon turned into a royal pain in the derriere, when he received a blackmail note the following morning. Then, it was his ass on the line; spank or be spanked.

It was months ago that Rebecca cheated on her husband with his younger brother. Navin still won't look at her, even when she dresses up for him in black lace, stockings, garters and heels. There's only one way to salve the old wound, Navin must discipline her like a naughty child. A wooden spoon against her bottom should do the trick.
Posted by Giselle Renarde at 9:24 AM