Hey Everybody!
I've decided to have an impromptu theme week here at Donuts & Desires to showcase anthologies from Xcite Books. I'm calling it "Xcite Week." Creative, right? I know. Ya gotta have that imagination going full force when you're a writer. (HA!)
So, why am I doing this? Well, I have a lot of stories in Xcite anthologies, and they're great to work with. I never seem to shout that from the rooftops, so I feel a little guilty. Ah, guilt is a driving force in so many things... 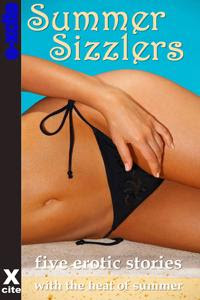 Because it's summertime (boy, is it ever!) the first compilation I want to draw your attention to is Summer Sizzlers. This one is e-book only, and features five stories from a variety of authors:

Kate and Mark have arranged to be taken to visit an out-of-the-way Romanian castle by Dimi, who Mark met in a bar. But as the handsome, dominant stranger leads them deeper into the woods, is Kate right to fear that he might not actually be of this world, and what is his real reason for luring them to this remote location?

Priya takes the window seat, her husband at her side. Next to him sits Fawaz, the lover she's struggling not to acknowledge. But clever Fawaz knows how to get a girl's attention: just strap her into a remote-controlled butterfly vibe before take-off. This is a story about Western freedoms, immigration delays and the budding of a polyamorous union.

Jemima has a sexy love affair with the ocean. To her, nothing’s more of a turn-on, than all that loving attention from the rippling ocean waves and currents. However, deep down, Jemima is unfulfilled. She has a secret fantasy and she dreams of watery sex with a man who’s as passionate about oceanic frolics as she is. Anthony’s been observing Jemima’s sexy antics on the beach for a long time and he knows she conceals a secret and she’s not going to turn out to be your average beach babe. Is Anthony going to be able to give her what she craves?

Carrie knows that the way to get Joe to notice her is to use her brains as well as her body – a sizzling summer festival gives her the chance to turn her scientific genius colleague into a lusty sex partner: all she needs is a stone circle and a research proposal ...


The Battle of the Clans by Carmel Lockyer

Summer in Scotland is usually all mist and midges, but for Christy, it’s even worse – mist, midges and misery. She wants a Master to take control of her life, but nobody’s replying to her personal ads. Can a Highland battle give her what she needs and is she willing to do what a complete stranger tells her, to prove that she’s a true submissive?

You can buy it now from a lot of e-retailers, including Amazon:
Posted by Giselle Renarde at 7:50 PM