If one anthology of spanking stories isn't enough, then you might need Six of the Best Spanking Stories 2! 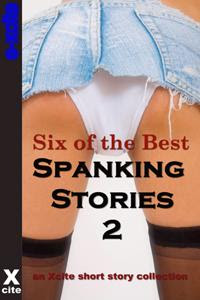 Pretty city boy, Tim Harris, is the last man Suzie Sheridan would have hired to help her on the farm had he not been the only one who applied for the job. But with strict discipline generously applied in all the right places, even Suzie is amazed at just how good a hired hand Tim turns out to be.


Just the Ticket by Elizabeth Coldwell

All Laura had to do was deliver a Cup Final ticket to her husband's best friend, but she seems to have lost it on the way. So she shouldn't be surprised when Jason decides to give her a suitable punishment to make sure she isn't so careless in future.


In Tooth and Claw by Giselle Renard

Dotschy's reached that point in life where she never wants to bring another man into her home. It's one thing to fuck a co-worker in an underground parking lot, quite another to have him in her own bed. Connor, the sweet and sensitive cross-dresser, understands her apprehensions and assuages her fears. Good thing! Had she not invited him home, Dotschy would never have discovered how delicious a good dose of pain can be.


Hot for Teacher by Renee

For Darren, the first time was supposed to have been the only time but Courtney has other ideas. With his fiancée sitting in the audience at one of his wrestling matches, a nineteen year old Courtney lures Darren into a deserted classroom for some hot and heavy away from the ring action. A not so innocent smack on her bare ass leads to a spanking that ends with her wet and ready to be taken right there on the teacher's desk.


Making It Happen by Fulani

Lisa has a dead end job in a petrol station. But she reads. A new self-improvement book tells her about the law of attraction. If you want something to happen, and believe it will happen, you can make it happen. Lisa doesn’t know exactly what she wants, but has faith that she’ll find something wonderful and exciting. And she gets it, in the shape of the leather-clad biker and an afternoon motorcycle ride into the country.


The Naked Truth by Dee Jay

Private eye Lucy is booked to follow a wife who is suspected of having an affair. She is led to a night club where she gets to know the suspect. They attend a party where she is trapped by the wife who tells her she knows what she's up to. Lucy is punished, after which the pair have passionate sex. Lucy now knows what to tell the client who booked her services.
Posted by Giselle Renarde at 4:37 PM