In case you missed Lara Z's intro last week, I'll briefly recap by saying that "Sapphic Signs" is a line of lesbian fiction available from Torquere Press. Every week I'll be featuring a different book from Sapphic Signs. I don't have a story in this line and I have no vested interest in promoting it, beyond the fact that I'd like to see lesbian fiction selling big-time because I looooooove it. :-)
Without further delay, here's this week's Sapphic Sign: 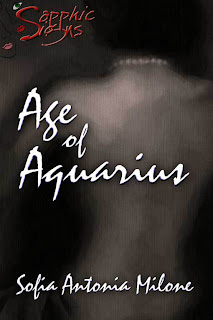 The Age of Aquarius

by Sofia Antonia Milone
Young and often political English artist Charlotte Hope clashes with renowned New York Times art critic Rachel Stein, whose praise is hard to earn. Set in the late sixties in New York City during the infamous Summer of Love, and with a backdrop of national and international conflict, tension builds between two women, who find themselves working together toward a common goal. Charlotte learns she doesn’t have to like everyone she sleeps with, while Rachel discovers quite the reverse. Eventually they learn that tragedy can bring people to their senses, and bring them together.
Sample

“Why are we doing this?” Charlotte asked plainly one afternoon as they lay in post-coital slumber for the usual designated ten minutes. That slumber seemed to now include a little chatter, she noted.

Jefferson Airplane blared out though small tanned speakers, something about joy dying and the truth being lies. Rachel picked tobacco from her teeth. “Because it’s fun.”

“Depraved is what it is.”

“I prefer to think of it as decadent,” Rachel blew a cigarette circle at her before answering the question. Charlotte frowned at the act, squinting to avoid the gray cloud that was advancing. “I don’t know,” Rachel said. “I’m sure there’s some psychological bull crap behind it. For you I imagine it’s about power, forcing me to submit to your will.” She smiled. “Personally I just prefer angry sex; it’s generally better.”

“Is that why you do your best to enrage me?” The question was clearly rhetorical.

“You say it like I have to try, darling!” Rachel drawled, smiling indulgently.

Posted by Giselle Renarde at 9:21 AM