It's the second week of our Sapphic Signs celebration, and today's featured lesbian title from this astrological line at Torquere Press is... 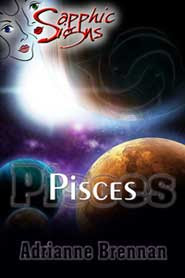 Marissa Balik would do anything to get away from her job on Jupiter Station, including transferring to another post on board the space vessel Ichthyes, whose destination and true objectives are not what they initially appear. Soon she’s thrust into a world where alien technology, space exploration, and solving mysteries are every day events, and the new assignment proves to be complicated further by her increasing attraction to its captain, Victoria Van Maanen.

When a mission turns both strange and dangerous, Marissa must fight not just to keep from succumbing to her feelings for Victoria, but to stay alive. Can she rely both upon her wits and her captain to survive?

With great caution Marissa backed away from Dr. Naida, keeping her in her field of vision the entire time. “C-captain, what the hell is going on here?” She managed to speak just above a harsh whisper, her throat tight.

She heard a rumbling sound from somewhere behind her. Turning towards it, she saw a large machine rattling. Then it began to fall—right over where Captain Van Maanen stood.

“Victoria!” Adrenaline racing through her, Marissa sprinted and shoved the captain out of the way. The two collapsed onto the ground, Marissa falling onto Van Maanen. A great crunch and a thud, and the machine landed on the floor mere inches from where they were — in addition to blocking the door leading out.

The noise rang in Marissa’s ears, and her breath came fast and hard. She looked down and realized with a start that the captain’s body lay pinned beneath hers. She could hear the captain’s own panting, feel her chest rising and falling. Warm and soft, but firm. The sensation was too familiar, way more pleasant than the circumstances called for. Now is really the wrong time to get turned on by the captain.

And Marissa had addressed her by her first name. Professional, gotta keep this professional....

Posted by Giselle Renarde at 2:25 PM