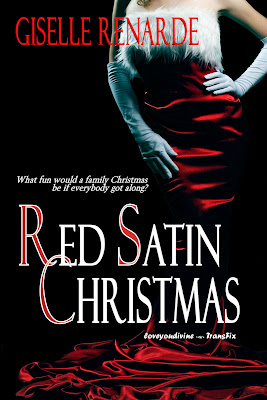 This is a Christmas of firsts for girlfriends Regan and Maisie. Maisie hasn’t returned to her hometown since beginning her transition from male to female. Her mother and sisters welcome her with open arms, but what about brother Jerry? Is he just going to ignore her forever? And who is this mystery woman he’s brought home for the holidays?

Regan figures she’s just along for the ride, lending her girlfriend support, until Maisie’s mother surprises her with a special dinner guest. Regan hasn’t spoken to her hard-drinking Cree father in years, and he’s the last person in the world she wants to sit across from at Christmas dinner. Can Regan finally trust the man who’s once again claimed to have changed for good?

Together, Regan and Maisie face drama beyond their wildest imaginings. Will their trials during this eventful family Christmas challenge their bond… or vanquish their limitations?
Excerpt:
Chapter 1: Early One Morning…

It was one of those wake-ups where you’re not quite sure where you are at first, and for a couple seconds you don’t even care because it feels so good to be alive. And then everything that happened the night before comes flooding to mind, and the morning takes a sharp turn…

Regan had slept on her side, which put a crimp in her neck, but Maisie was pressed right up against her back, enfolding her in the world’s warmest arms. Even if she’d wanted to, she couldn’t have moved. Regan was right at the edge of Maisie’s little twin mattress.

When the world came into focus, Regan stared straight ahead, at the lower shelves of the bookshelf in her girlfriend’s childhood bedroom. It was most definitely a space decorated for a boy—royal blue walls with a Toronto Maple Leafs border, autographed souvenir baseballs from when the Jays won the World Series in ’92 and again in ‘93—but Regan tried to ignore that fact as much as she tried to ignore the erection lodged firmly between her ass cheeks. Morningwood was something Maisie couldn’t help, and Regan knew her girl would find it humiliating if called attention to. Penises were not Maisie’s favourite thing in the world, and she had especially harsh feelings toward her own. Regan thought Maisie was the most beautiful woman in the world, penis or no penis, but of course she’d respect her girl’s wish to downplay the existence of that appendage.

Maisie shifted, making soft moaning noises in her sleep, her long silky nightgown rippled against Regan’s naked back. God, it felt good to have a woman’s soft fabrics against her skin. Regan never wore stuff like that herself.

The winter sun hadn’t yet risen, and Regan couldn’t see a clock anywhere, but she figured it must be pretty early because she couldn’t hear anyone wandering around in this house full of people. She had a faint need to pee, but just couldn’t bring herself to leave a warm bed and a hot body.

As Maisie carved her own path from sleep to wakefulness, her curvaceous body stretched and writhed. Regan felt the motion against her back like a giant caterpillar. And then that wave halted, and she knew Maisie had swum her way back to consciousness enough to realize her body was betraying her. For a moment, she was stone, and then her soft arms retracted from around Regan’s naked form. When Maisie rolled away after a night in such close proximity, Regan felt it like a stab in the gut.

“Morning, Beautiful,” Regan whispered before she’d even turned to look at Maisie. Self-fulfilling prophecy—even with a few stray specs of stubble growing in, Maisie was the prettiest girl Regan had ever known.