SEXcerpt from Wedding Heat 1: One in the Hand 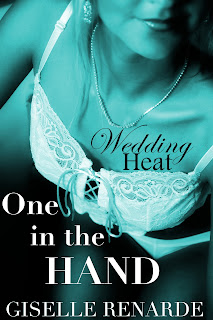 I'm in cottage country this week (do people outside of Ontario use that term?), so I've scheduled posts to go up every day.  And what are these posts about?

New installments in the Wedding Heat series are currently in production, but while we're on hiatus (I always said I started writing Wedding Heat because there was nothing good on TV), enjoy a new excerpt from existing ebooks every day!

Today, a new excerpt from Wedding Heat: One in the Hand.


Forget the happy couple–it’s the guests that make this wedding sizzle!


In One in the Hand, the first book of Giselle Renarde’s Wedding Heat series, the bride’s aunt Cora and uncle Dan are en route to Maggie and Ed’s weekend-long wedding retreat at a luxury resort.  When Cora tries to get handsy with her hubby in the car and Dan rejects her advances, will it ruin the weekend for Cora?  Or does Dan have a naughty surprise up his sleeve?


WARNINGS: This title contains graphic language and explicit sex–inside, outside, and on the hood of a car.


Cora looked up at her husband, though the angle was awkward.  The dark lust in his eyes told her everything she needed to know.  It was time.

Bowing into his lap, Cora slipped Dan’s tip fully between her lips, closing her mouth around it and sucking, suckling.  Not too hard, not yet.  She stroked his shaft in tempo, bringing that wonderfully soft skin toward her lips before pulling it back down, pushing and pulling like waves shifting sand on a beach.

She did as he asked, holding loosely to the base of his cock with one hand and his balls with the other.  That made him gasp.  Maybe he would come soon, though she didn’t want him to, not yet.

After rubbing the tip at the back of her throat, she was ready for anything.  Cora devoured Dan’s cock.  One move.  She just lunged down on the thing, letting it strike the back of her throat where it usually would have made her gag.  It didn’t.  Not this time.  She closed her whole mouth around his length and wetted his hot flesh while she sucked.  She’d never been this wildly turned on while sucking cock.  But, then, when was the last time she’d sucked cock in the front seat of a car?

Suddenly it occurred to Cora that they were in public and quite visible to anyone who might pull into this lot.  She sucked Dan’s dick a little slower, listening intently for other engines, other tires.  Nothing.  Nothing but chirping birds and squirrels calling each other in the trees.

She built up her pace, bobbing in his lap, less and less concerned about where they were.  She just wanted to get him off now.  She wrapped one hand around the base of his shaft and squeezed his balls with the other.  When he gripped the back of the seat, he shook the whole bench and Cora was thrilled.  Between her legs, she felt more wetness building up than she’d managed in ages.  She was turned on sucking cock, and that made her work even harder, stroke him faster, suck like crazy.

“Oh Cor, I gotta fuck you.”  Dan pulled her head from his lap, and her brain seemed to swim inside her skull.

The world looked a little darker than it had before, but that made sense.  The sun was going down.  Going down fast.

One in the Hand is now available, and you can buy it from lots of retailers.
Buy Now from Amazon: https://www.amazon.com/dp/B09WRV5FP6?tag=dondes-20Smashwords: https://www.smashwords.com/books/view/1139676?ref=GiselleRenardeEroticaGoogle Play: https://play.google.com/store/books/details?id=bW9mEAAAQBAJ
Nook: https://www.barnesandnoble.com/w/one-in-the-hand-giselle-renarde/1141307724Kobo: https://www.kobo.com/ca/en/ebook/one-in-the-hand-3Find more retailers through the Universal Book Link: http://books2read.com/WeddingHeat1
Posted by Giselle Renarde at 8:00 AM