SEXcerpt from Wedding Heat 2: Two in the Bush 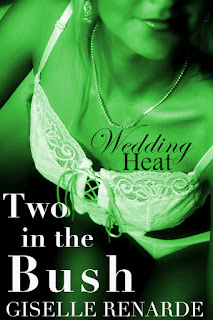 Did you know that every story in "season one" of the Wedding Heat series (ie. the first 6 ebooks) takes place on Friday night?  Maggie and Ed's wedding weekend is a 3-day affair. First season's Friday, Second is Saturday, Third is Sunday.

Today we've got a hot excerpt from the second ebook, Wedding Heat: Two in the Bush.
Irene has been in love with her co-worker Brian for years, but she’s never worked up the courage to tell him. When Maggie, a friend from the office, invites them to her wedding weekend at a woodland resort, Irene convinces Brian to share a room. Just when Irene is gearing up to make her move, she stumbles upon Brian making out with a beautiful stranger, Denitsa. Irene is crushed… until Denitsa finds a shocking way to bring the co-workers together!
EXCERPT:


“Oh god, you’re killing me,” Brian said in the most tortured voice Irene had ever heard from him.  “I gotta see you both naked.”

That word, both, made Irene’s heart race.  Alone she was invisible, but paired with Denitsa she was desirable.  For now, that was good enough.

“Undress me, sweet thing.”  Denitsa arched away from Irene and stood beside the bed.  She was still wearing dangerously high heels, which made the already tall woman look like a giant.  “Come, my darling.  Take off my dress.”

“I’ll do it,” Brian offered, bouncing off his bed.

Denitsa pushed his shoulder with just the tips of her fingers and he stumbled backward onto the mattress.  “The lady in red will do it.”

Irene felt a blush coming on, which was pretty amazing considering how hot she was already.  Sliding off the bed, she stood on wobbly knees, feeling all the crinolines in her Minnie Mouse dress.  She sensed Brian’s eyes burning a hole in her arms as she reached up for the straps of Denitsa’s dress and then pulled them down over those golden shoulders.

“Wow.”  Irene watched breathlessly as the V-neck of Denitsa’s dress tumbled down her breasts, hanging for a moment on her pursed nipples before slipping to settle against her wide hips.

But Brian’s voice was just background noise.  Irene couldn’t steal her gaze away from those golden breasts with their dark pinky-brown nipples.  She heard their call, and she answered with her mouth.

In flats, Irene was pretty much at eye level with Denitsa’s big bare breasts.  She tilted her head just a bit, just so Brian could get a better look as she opened her mouth for Denitsa’s nipple.

Irene’s heart thumped wildly at the compliments.  When she pulled away to say thank you, she saw that her lipstick had left a red ring around Denitsa’s nipple.  The sight made her knees weak.  It was like a temporary tattoo that she’d placed on the other woman’s skin.  For some strange reason, it made her feel like she could do anything.

“Are you jealous of the lady in red?” Denitsa asked with a swift nod in Brian’s direction.  “You want to suck my tits too?”