The Women Who Love to Love Gay Romance 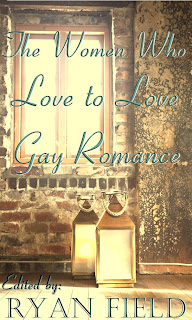 For years, I've been wondering if anyone else had this idea: a book about straight women falling for gay men. Happens all the time, and gay romance is hugely popular right now... so why wasn't some editor putting out a call for gay romance stories where a woman is somehow incorporated into the action?

Well, finally it happened.  I may not be straight (or a reader of gay romance, for that matter), but you can't fight fate.  When Ryan Field announced that he was editing The Women Who Love to Love Gay Romance, I just knew I had to submit something.

My story in this collection is called Baby Got Bach, and I hope Owen Pallett never ever reads this blog post because I'd be really embarrassed if he knew my character Jamieson Lynch was loosely based on him.  I hardly ever get crushes on guys anymore, but when I do they're pretty much always gay guys. This story was either going to be me perving over Rufus Wainwright, or me perving over Owen Pallett.

Rufus fans, you'll get yours one of these days.  I've got half-baked plans.


Anyway, I read Ryan's call for subs right around the time Owen Pallett's violin concerto was premiered with the Toronto Symphony Orchestra.  I was there, kids.  Oh yes I was.  And so was he, though not performing his own work.  He DJ'ed the afterparty.  I saw him.  He was RIGHT THERE, close enough to touch, but do you think I had the balls to walk up to the guy and say, "Great concerto, dude"?  Or something equally innocuous?  Or idiotic?  Or just... anything?

Nope.  Couldn't do it.  We were in the same room and I couldn't force myself to say hello.

So instead, I wrote this story.

If you’ve ever wondered what it might be like to be a straight woman thrust into the intimate, emotional relationship of two gay men, this book might answer a few of your secret questions. It’s a collection of very different fictional stories that mesh together and create fantasies that in some cases could actually happen in real life.

When one gay man falls in love with his best girlfriend and her boyfriend, it becomes a heart-wrenching trilogy with three new adult stories by Bella Stanberry that cross social boundaries for which the characters will eventually pay a price. In Anna Black’s Fallen Angel, the straight female character finds out what it’s like to explore her most discreet fantasy. And in Baby Got Bach by Giselle Renarde the straight female character is invited to cross a line that leaves her terrified.

A Touch of Therapy by Morgan Honeyman delves into new age lessons about how to heal as the main character observes two gay men from a comfortable distance. Li Blaine’s Changing Curses is a more lyrical dream world which takes a mystical approach when the main character figures out a way to rid herself of a curse. The Facilitator by Tilly Hunter shows how a woman can find herself involved with her best gay friend and his boyfriend, with handcuffs and her grandmother’s wooden spoon. And in the sweet, tender tale of Lustful Wishes by R. Noir, the main character is a confused young man who has had both women and men in his life and he’s trying to figure out how to do the right thing.