Available for the first time as an #ebook: The Therapist and the Whore 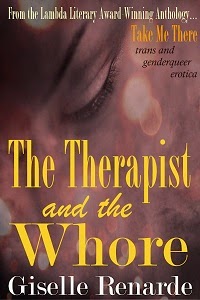 A short story from the Lambda Literary Award-winning anthology Take Me There: trans and genderqueer erotica.

Manny never tells anyone the full truth.  Her therapist Liesl doesn't know she started binding her breasts and stopped correcting people when they call her "Sir."  Her girlfriend Danica doesn't know she's been sleeping with a transsexual prostitute named Star.  Manny identifies as a butch dyke, so why isn’t she acting like one?

With intense emotional attachments to a girlfriend, a therapist, and a whore, Manny's situation is complex.  She can't juggle these three women anymore… but how can she choose between them?

It felt nice to be soaped up by Star, naked, skin to skin.  As Star ran suds down her ass crack, Manny mulled over her compounded lies.  “I told Liesl Danica won’t look at me naked.  I don’t know why.”  She stared at the faint reflection of her dark skin in the white tile.

“It becomes true the second you tell Dr. Liesl. You believe everything you say to her. When you lie to her, you’re lying to yourself.”

As warm water coursed across her flesh, the sudden insight brought Manny to a new level of nudity.  Star washed and dried her, bound her tits and helped her on with her clothes.

Posted by Giselle Renarde at 11:10 PM