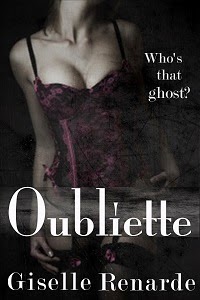 Read an Excerpt from Oubliette:

“I’m not wearing the right shoes for this,” Saba objected while Miranda coasted down the gravel path.

“You’ll be fine. They can’t have gone too far. Wow, it’s really dark out here.”

“Nice to get out of the city,” Saba said. “No light pollution.”

Miranda was about to say, “I’m so glad we came here,” when she heard the crack of a branch underfoot. Saba must have heard it too, because they stopped in their tracks at precisely the same moment. It happened again: footsteps in the wooded area beyond the path. Miranda grabbed Saba’s arm and squeezed.

“Yeah, me too.” Miranda clung even harder to Saba’s arm. “Do you think it’s an animal?”

“No, it sounds too big.” Saba raised her voice to call out, “Hello! Is anybody there?”

Miranda had never listened so hard in her life.

“We’re not too far from the castle,” Saba said softly. “Why don’t we head back?”

“No, I want to find out what it is.” Miranda crouched down and aimed her flashlight into the bush. Even fully illuminated, the greenery looked dark. It was thick enough that she couldn’t see what was making those noises. Probably just a skunk. She’d laugh if that’s what it turned out to be. Laugh, and run.

And then another noise, a murmur. Like a baby. She strained to hear where it was coming from, or even what it was, but her heart thundered in her ears. It was hard to hear anything else.

Saba squeezed her shoulder, digging sharp nails into her flesh. “We have to go in there. Somebody’s hurt.”

“You think?” Miranda pried apart the branches she couldn’t see past.

She jumped when her flashlight caught a pair of eyes.


Giselle Renarde is a queer Canadian, avid volunteer, and contributor to more than 100 short story anthologies, including Best Women’s Erotica, Best Lesbian Erotica, Best Bondage Erotica, and Best Lesbian Romance. Ms Renarde has written dozens of juicy books, including Anonymous, Ondine, and Nanny State. Her book The Red Satin Collection won Best Transgender Romance in the 2012 Rainbow Awards. Giselle lives across from a park with two bilingual cats who sleep on her head.
Posted by Giselle Renarde at 1:36 AM