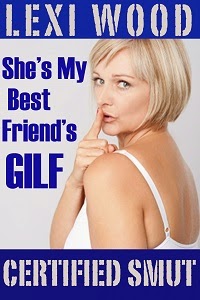 Jesse’s never been with a woman, but not for lacking of wanting! He just gets nervous thinking what he’d do with a girl, if he ever found himself alone with one.

When Jesse visits his best friend one Sunday afternoon, Brad’s not home—but someone else is. Brad told Jesse his grandmother was staying at his house while recovering from surgery. What Brad didn’t mention was that his cougar GILF grandma got a boob job!

Bonnie loves younger men, and she can’t wait to show off her big new breasts. When Jesse shows up at the door and nobody else is home, the sexy granny takes her opportunity to pounce.  But will Jesse be up to the task? Or will the inexperienced young man come before he’s called?

She’s My Best Friend’s GILF (Grandma Got A Boob Job!) is a first time short by Vulgaria’s sweetheart, Lexi Wood!

“Brad told me his gramma’s been staying with him, but I’ve never met her.”

She smiled and tossed her hair behind her shoulder, showing off her massive breasts.  “Well, sure I am.  Why wouldn’t I be?”

When Bonnie laughed, her big boobs bounced inside her tight, low-cut top.  That hot pink colour glowed against her tan skin.  She certainly didn’t look like a woman who was recovering from surgery.

“Well, come on in.”  She wrapped her fingers around his wrist and drew him into the house.  “I’ll make you a sandwich.”

She cocked her head as she led him into the kitchen.  Jesse wasn’t sure what aroused his senses more: the promise of food, or the insinuation of Gramma’s giggles.

Posted by Giselle Renarde at 12:28 AM