I can't believe it's taken this many years to get the answer "69" for question #5! Here's today's quick six TNG interview with Kallysten: 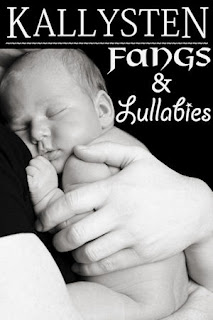 Walking off the plane the first time I flew to my then-boyfriend's, now-husband's hometown, and finding him waiting for me with a camera in one hand, and a bouquet of flowers in the other. I wasn't too happy about the camera – it had been a long flight and I looked like it – but the flowers were as lovely as his smile. (This was back in those days when people could wait for passengers right at the gates.)

Welcome to Gattaca. Unsettling to me because it's not hard at all to think that the movie's premise of a society based on the quality of your genes and DNA could become reality within a few decades, or even sooner.

A star on my right temple.

6. Which of the books or stories you've written is your favourite? (Please include buy link and blurb in your response)

Every time I release a new story, it becomes my favorite – until the next release, that is! This one however might retain the title for a while because I fell in love with all three members of the "Fangs and Lullabies" family, to the point that I started writing a sequel before the story was even released.

A child's birth. His first teeth and first steps. School friends and bullies, recess, school plays and science projects. A girl, a crush and a broken heart. These childhood experiences are shared by countless little boys from different horizons.

And yet… Jacob is anything but average. For as long as he has been able to understand, a secret has shaped his life, kept even from his closest friends: his father, Andrew, is a vampire. And so is his other father, Nicholas.

In a strange era when demons are beginning to appear all over the world and threaten humans and vampires alike, the three of them form quite an extraordinary family. And yet, at the same time, they could hardly be more normal.

Two fathers raising a son neither of them ever thought he would have. A Sire and Childe resuming their relationship after years of estrangement. Through snapshots covering Jacob's life from birth to adulthood, discover this unusual family, and how, in the end, all it takes is love.

Posted by Giselle Renarde at 1:28 PM