I'm very pleased to announce I have a stockpile of Quick 6 interviews with some great authors of lesbian fiction! We'll start today with Sofia Antonia Milone: 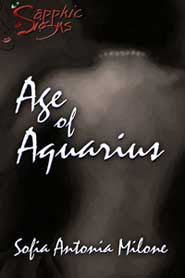 It's a flavour of ice cream, clearly. Oh, and a tiny lesbian bar in the gay quarter who's clientele stare at people they've never seen quite ferociously.

Most of it, due to over analysis, both good and bad, but particularly moments of falling of horses and seeing the floor about to hit my face. Certainly nothing romantic.

Hostel, without a doubt. I know there are worse films, but after this I vowed not to subject myself to movies with such pointless horrific violence. Burlesque is a close second, there's no accounting for crimes of cliche.

What? None. I fired them after the last escapade. My poor cat will never recover.

I've only had one story published so far, so I suppose it has to be that. But I imagine my favourite will always be the next one.

Young and often political English artist Charlotte Hope clashes with renowned New York Times art critic Rachel Stein, whose praise is hard to earn. Set in the late sixties in New York City during the infamous Summer of Love, and with a backdrop of national and international conflict, tension builds between two women, who find themselves working together toward a common goal. Charlotte learns she doesn’t have to like everyone she sleeps with, while Rachel discovers quite the reverse. Eventually they learn that tragedy can bring people to their senses, and bring them together.

Posted by Giselle Renarde at 11:20 PM