Guess who's here? It's Justine Elyot, with a guest post called 'Anything But Vanilla.' I'm handing it over. Here I go. Here she is: 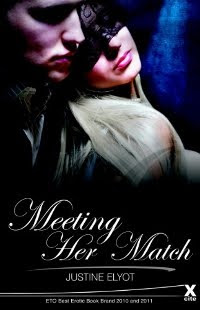 Then it struck me. I could just write my own stuff, to cater to my own tastes. Maybe
too mild for some, too extreme for others – as with pretty much everything, kink has
a spectrum. You are where you are on it and it's nothing to feel inadequate about.
Unless you get off on feeling inadequate, of course, in which case – go for your life.

In the hotel room, we dressed again, this time surrounded by luxury and history
instead of cheap felt carpeting and plasterboard walls. Justin had bought a new
martinet at Shepherds Bush Market and was swishing it to and fro while Maz rubbed
gold-flecked lotion all over my bare flesh, which took some time.

"So you're feeling brave?" Maz asked gently, reaching deep down into my cleavage
and working the ointment in. "You want to go through with what we talked about?"

"I think so. Dressed like this makes me want to even more. Funny how just changing
clothes can get you into a mindset."

"It's good, isn't it?" Justin grinned, wrapping the leather fronds of the whip around
one of the bedposts with a flick of the wrist. "How something as simple as showing a
lot of skin can make a person feel submissive. And when you add collars and cuffs to
that…"

"It's a bit like magic," I agreed. "Before a word's been said, I want to kiss somebody's
feet."

They were cute feet, toes wriggling in gladiator sandals, but I decided to pass for the
moment.

"Maybe later. You look great too, by the way."

In her abbreviated silk toga and richly-jewelled cloak, she looked imperious and
impish at the same time. I supposed that was the trick of switching. The opulent
cloths were mistressy enough, but the teeny toga hem was perfect for flipping up and
delivering an impromptu spanking. She could go either way tonight.

"Right then, you two," said Justin, bored of practising his whip hand on the
bedposts. "Bend over the end of the bed and let's give this a proper trial run."

"Both of us?" squealed Maz.

"Of course. Bottoms bared, please. I want you both going downstairs with noticeable
markings. Besides, I think a little warm-up is a sensible idea, don't you?"

Yes, I do! And if you want more than a warm-up, here are some more details:

Heartfelt thanks to the wonderful Giselle for letting me blether on here today – and
thanks for reading.
Posted by Giselle Renarde at 1:27 AM