To Answer A Question Nobody Asked... 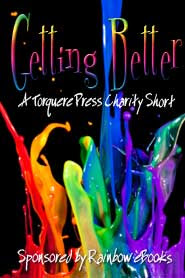 Pretty much every year since I started writing professionally, I've been donating 4th quarter royalties to a queer helpline called LGBT Youthline. I love what this organization does--queer youth helping queer youth--and it's been a joy to attempt to raise money for them.
But the key word there is "attempt." In 2010 I let readers vote on which of my titles I should donate money from and I had great feedback. Unfortunately, sales didn't pan out. To be blatant about it, after all the promotion I did (with the help of wonderful people like Kiki Howell and Sally at Bibrary) I managed to raise under $5.
Yeah.
So this year I decided to go a different route. One of my publishers, Torquere Press, organized a charity Sip line to raise funds for It Gets Better. I wrote a transgender lesbian erotic short called Eclipse the Stars, a story about Jody's jealousy of her girlfriend Renata's beauty and confidence after surgery. It's a long-term couple story. It's a love story. With sex.
Here's the best part: Eclipse the Stars is available from Torquere Press and Rainbow ebooks, and neither the publisher nor the e-store (nor anybody--cover artist, author (me), editor, proofreader) is taking any percentage of the purchase price. It all goes to charity.
One of the hurdles I encountered in fundraising was trying to go it alone. In 2010, the wonderful Jay Hartman at Untreed Reads went above and beyond to help me and Youthline by contacting Rainbow Ebooks. For one weekend, the entire purchase price of my lesbian eating disorder short UGLY NAKED PEOPLE was donated to Youthline and we raised just under $50 if memory serves. That's amazing for one little short at one ebook retailer in one weekend! It worked because author, publisher, and e-seller were all on board and all willing to work together to support a queer organization.
That's what needs to happen to fundraise effectively.
So Eclipse the Stars is available from September 2011-September 2012, with all proceeds going to It Gets Better. Everybody's working together, and already (actually, in the first 2 months it was available) this trans lesbian story raised like 600% more than I raised on my own the last year I tried any solitary fundraising.
It takes a village to raise money.
Hugs,
Giselle
p.s. Thank you to everyone who has supported any of the above-mentioned fundraising efforts. Huge Hugs!
--
Giselle Renarde
Canada just got hotter!