The Forgotten Ones (books, that is)

Authors: have you ever written a book and then totally forgotten about it? 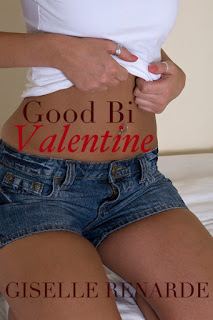 Today I stumbled upon a little ebook of mine called Good Bi Valentine, and I was sort of like... oh yeah... THAT.  It's not like it came out a long time ago.  Good Bi Valentine hit the shelves in early February of this year (am I a marketing genius or what?) and it's sold a few copies at Barnes & Noble and some other retailers, but by and large it hasn't made waves.

Oh wait... except that it kind of has.  Good Bi Valentine made quiet waves by quietly being taken off the quiet shelves of quiet All Romance Ebooks.  Apparently, it was too (fill in the blanks--your guess is as good as mine).

It was published, originally under the hefty name "All in a Valentine Day's Work."  After the contract with its first publisher ceased to be, I decided to shorten the title and highlight the fact that lovely Lexi the Sexi Super is bisexual.  (The book isn't about a break-up or a "goodbye" but rather a gay old time, an enjoyable bisexual Valentine's Day)

Anyway, the point I wanted to make was that, until today, I'd totally forgotten this book existed.

My question to other authors is... is it just me?  Do you guys ever stumble across one of your books online and have that moment I described above?  Which of your books have you forgotten about?

(Oh yeah, and Good Bi Valentine is published by eXcessica and available at Amazon and a whole bunch of other places)
Posted by Giselle Renarde at 12:58 AM