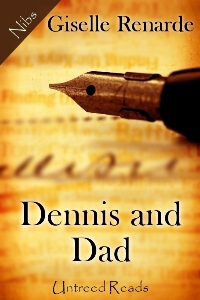 Here's me, the fatherless one, writing a heartrending and supremely father-full story about gay parenting and Father's Day.

DENNIS AND DAD is one of my rare non-erotic titles. It's a Father's Day short story that involves gay parents, aging parents and fathering beyond the boundaries of a conventional family unit. It's the snapshot you can't stop staring at.  I cry every time I read it.

I cry because it's a pretty challenging little piece.  As you'll see, the excerpt begins with Chris's father using a racial epithet--totally uncharacteristic, totally "not dad," totally disappointing.  This gets Chris wondering what the hell's going on with his father.  Dad's life partner has some answers, and when Dennis gets Chris alone their conversation... actually, their conversation is my personal tipping point.  That's what makes me cry.  Dennis adores Dad so much, and is so committed to him, so resolved to do what's best for the man he loves, that Chris just knows Dad is in good hands.

What inspired me to write Dennis and Dad?  Actually, a big part of the inspiration came from my mother. I went to visit her one Sunday, and I was making us tea and sandwiches, only when I poured the milk it was chunky.  "That's fine, it's fine."  And when I took out the bread, it was GREEN.  Seriously.  It was a big loaf of mould.  I threw it in the trash, but she pulled it out.  "It's fine, it's fine."

That was the first time I thought of my mother as... old?  Aging?  You hear about meals on wheels recipients getting sick after leaving food sitting out for days, and that's what it reminded me of.  Green bread and chunky milk are not fine.  It was such a jarring experience, because it was the first time I felt like someone should be supervising her.

This experience, for adults of aging parents, draws a parallel to that childhood moment... the first time you realize your parent isn't perfect.  We go through that psychic trauma all over again as adults when we realize parents aren't as capable of caring for themselves as they once were.

Actually, that parent-child/child-parent experiential parallel is the reason I included so many children as characters in this story.  But I won't go in to their significant role, because I've talked enough as it is.  DENNIS AND DAD is a very inexpensive ebook, so you can take a look for yourself.

Description:
During this year's Father's Day visit, Chris realizes his dad is aging fast. When Chris notices his father's confusion and strange behavior, Dad's long-term partner Dennis expresses his own concern that these are more than just "senior moments." Chris's dad refuses to see a doctor, but with the impending issues around hospitalization and next-of-kin legalities, Dennis and Dad have made a big decision about their future together. A short story.

And then, from the stairs: “Who’s the darkie?”

Chris’ blood curdled, and for some reason he looked to Dennis, whose eyes were just as wide. “Dad?” Chris asked, unable to process that statement or its intent. A joke? Why? “Dad…what the hell?”

His father glanced slowly at the group of people in the front hall, and screwed up his eyebrows like he was surprised to see them. Nodding toward the window, Dad asked, “You got a new kid?” He laughed, but he was the only one.

“Becky’s friend came along,” Kim said. Her tone seemed reluctant, to Chris, like she just wanted to turn tail and run. Chris knew the feeling. “Remember, Ron? I told you on the phone. I asked if you wouldn’t mind an extra visitor.”

Dad grimaced like he was searching his brain for this information and not finding it. His expression went blank for a moment, and then a scowl took over. “I remember,” he snapped. “But you didn’t tell me she was a coloured girl.”

“Dad!” Chris couldn’t believe his ears. He’d never in his life heard his father talk this way. Never. He really didn’t know how to react, and obviously no one else did either, because the lot of them stood in silence. He found himself looking to Dennis for some kind of explanation, but Dennis averted his gaze, sheepishly, or nervously. Chris wasn’t sure which.

Dennis recovered at last and said, “We haven’t even invited you in! Come on, we’ve got a whole brunch spread laid out in the kitchen. What do you want to drink?” He took the bags from Kim and led the way.

“You two always have the best coffee brewing,” Chris said. He wanted to forget his father’s uncharacteristic comments, but he felt disjointed now, like nobody was who they were supposed to be.


DENNIS AND DAD is on sale for the month of June at Untreed Reads (only $0.74!): http://store.untreedreads.com/index.php?main_page=product_info&cPath=11&products_id=425

It's also available at a bunch of other e-tailers, including Amazon and Amazon UK.