FaceBook. What does the word mean to you? Keeping up with old friends or far away relatives or business associates or, just maybe, reconnecting with an old friend or even an old boyfriend? Yes, we hear these stories, usually in a negative light though due to broken marriages, etc. But, what I want to hear are the good Facebook stories! No, let me rephrase that, the sexy FaceBook stories…something like FaceBook confessions. Now there is a concept.

The endless possibilities here is what I was thinking about when I wrote one of my novellas. I mean there is the obvious tale, the single gal, maybe with a broken heart, who is healed after catching up with the one that got away on FaceBook, and then meeting for that hot steamy sex, a first time for them after all of these years. Nice, and probably very hot, but again, not what I was going for. I wanted modern and unusual for my story.

Here is the situation I came up with though. How about two old girlfriends meet? Well, friends is being used loosely as they were friends when young, but then went different paths in high school, one of them gaining that questionable reputation. What we end up with then, is an online friendship, one woman now a stay at home mom with sexual frustrations and the other a newly married woman who prior had lived a life right out of some erotic novel. The more experienced of the two at first starts sharing her sexual escapades in short statements on FaceBook chat at the begging and pleading of the stay-at-home mother. But, when the new FaceBook friends meet days before their high school reunion, now that is when the fun starts…from the girlfriends playing together in the dressing room of an adult store, to including one husband, to including both husbands. All of this yumminess from a few FaceBook chats about sex? Why not?

So, here is an excerpt from one of the chats in my novella, Finding Paradise:

Nevaeh Knollinger Wade Led him to room, soon as we got in he pressed me against the wall, his hands felt huge when he ran them down my sides, was wet instantly – god, should I have said that? How many details you want?

Nevaeh Knollinger Wade LOL!!!! Okay. You asked for it! He tore off my sweater, forced my back harder against the wall, bra disappeared, one nipple he rolled between his fingers, the other he took into his warm mouth, he sucked me in, greedy

Kelly Carver Gordon Like a man desperate for nourishment! No, I don’t read it too much!

Kelly felt her own nipples tighten into stiff peaks. She found herself becoming more aroused noticing the way Nevaeh’s two tiny mounds presented themselves under her dress in her profile picture Then, she quickly turned her eyes to her mug of tea as if she would get caught.

Nevaeh Knollinger Wade Sorry. I’m not being poetic enough for you.

Kelly Carver Gordon No, I was just being goofy trying to make sure you feel comfortable, kept telling me the story :)

Nevaeh Knollinger Wade Okay. Continuing! Threw head back expecting him to go to the other nipple, instead his mouth trailed down over my stomach, pressure was intense, my stomach clenched, his other hand squeezed my other breast at the same time… make sense?

Kelly Carver Gordon I think I get the picture quite clear ;)

Nevaeh Knollinger Wade His touches were pure pleasure bordering on pain, he placed
a kiss on my jean-covered mound, undid my jeans, tore the denim off me in seconds, then he surprised me again, he bit at the cloth of my panties, tugged them away from my flesh with is teeth, then let them snap back against me, several times before pushing aside with his fingers, he spread me open, licked me. I am no writer, but this is fun trying to come up with the words. Maybe I should’ve said, spread open my throbbing pussy lips – I’ve read an erotic romance or two in my day!

Kelly Carver Gordon You are doing an excellent job.

Nevaeh Knollinger Wade Are you wet, my old neighbor/new friend? Are your nipples
hard? Mine are.

Kelly had a moment of feeling weirded-out, and worried about how she would now feel face to face with Nevaeh at the reunion. But, she’d promised she would go. What the hell, now. She continued to play along.

So tell me, does this really happen? Any stories you’ve heard of FaceBook and Sex? If so, add them in the comments here. They can always be about a “friend” *winks* 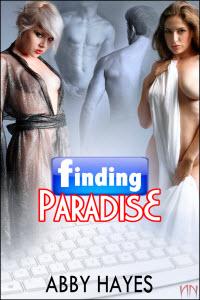 This sexy, world traveler incites Kelly to forge a friendship unlike any she’s ever had before. She never knew a shopping trip could be so educational, especially in an adult store. With her head spinning and her panties damp, Kelly embarks on a crusade to reignite the passion her and her husband, Nate, once had with a few new toys and other surprises. When he surprises her by being a more than willing participant, she decides to test a few boundaries, push a few limits...

Kelly becomes determined to find out if her old neighbor is right, if
paradise can be found within your own four walls with the man you married. But, what happens when Kelly’s husband finds out about all of her time spent with Nevaeh? What will happen when Nevaeh’s husband, Hayden, comes into town for the reunion? Will her marriage be in trouble, or will things go further than Kelly ever dreamed they could go?
Reviews:
"Warning: please refrain from reading Finding Paradise while in the presence of others, as frequent relief may be required. Holy smokes this book is HOT! From Nevaeh’s stories to Kelly, to the women experimenting with one another in a sex shop dressing room, Finding Paradise is one book that I will be reading over and over again instead of putting in a sexy movie. Ms. Hayes has done a few remarkable things with this book: first, she’s written the online chatting scenes as they would be written by any one of us, with a lot of shorthand and some “real life” cringing and questioning after typing something off the wall. Secondly, Ms. Hayes has really included something for everyone in this short story, I won’t ruin the surprise by discussing the amazingly indulgent final sex scene, but let’s just say my husband and I may have to have a serious talk about sex pretty soon! Both the erotic and the mundane are terrifically portrayed in Finding Paradise, and I truly hope that Ms. Hayes decides to put out a follow up book with more tantalizing and playful encounters between Kelly, Nevaeh and their husbands. For exquisite sex scenes, amazing writing and the "real talk" feel for online chat, Finding Paradise is certainly deserving of a JERR Silver Star Award. Bottom line, find your own bit of paradise and pick up Finding ParadiseASAP!" - Silver Star Award at Just Erotic Romance Reviews (5/5 Stars)

"Finding Paradise is a scorching hot read... Kelly and Nevaeh, as well as their respective husbands, are very believable characters. Ms. Hayes has portrayed them in a way that any reader can relate to the emotions and actions of them... Finding Paradise is a unique story that will sit on my shelves for years to come. There is a lot of passion and excitement as some characters explore new sexual adventures and others share their adventures. This story is one of those rare finds that comes across as unique, sexy, hot, and adventurous all rolled into very few pages!" - 4/5 Paddles at BDSM Book Reviews, Reviewed by Star

“This is the first book I have read by Abby Hayes and to say I was intrigued with where the story was going is an understatement. I was expected a little girl on girl, perhaps a menage but a full fledged partner swamp and orgy...I was tickled beyond belief. Hayes built believable characters with Kelly and Navaeh, Nate and Hayden.  All in all, Hayes approach was fun, lively and gave a little insight into how a couple can re-kindle a romance by introducing safe avenues into their love life.” – 4/5 Cups at Coffee Beans & Love Scenes Reviews

Available Now at Amazon, All Romance Ebooks and Smashwords

By day, Abby is what the world tells her to be. By night, alone with her imagination, she is who she wants to be. Giving into the breathy voices who pant new and exciting sexual scenarios inside of her head, she pounds away at her keyboard. Abby’s only goal is to have her readers free their own minds, grab their ereaders, and go away with her into a world where no one judges what the body wants, instead they explore what the flesh is capable of.