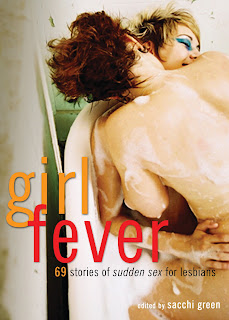 Well, this one's like that one, only different.  Girl Fever: 69 Stories of Sudden Sex for Lesbians (edited by Sacchi Green) is all about lesbian sex.  You might have gleaned that from the title.  You're pretty sharp.

This antho's got a release date of June 12, 2012 at Amazon, but I keep hearing that it's available now.  So if you're in the market for lots of lesbian sex (no comment--except to ask, like, come on, who isn't?) Girl Fever's an option.

I contributed two stories to this anthology.  Hey, want a really quick excerpt from one?

"Saucy Cheeks" is a lesbian spanking story I wrote one night after being over an hour late meeting my girlfriend and another couple for dinner.  It really wasn't my fault, but I felt like such a dolt, so I turned my embarrassment into spankings:

Before she knew it, Donna’s mouth was slanted across hers, their lips a tight seal, tongues wrestling.  This never happened.  Never.  But it was happening now—Donna was kissing her in a public bathroom, and kissing her hard!  Marigold couldn’t get over the heat coming off her girl’s body.  She felt consumed by it.
“I thought I’d be in trouble,” Marigold whispered, panting.
“Who says you’re not?”  The growl in her girl’s voice made Marigold loopy, and she couldn’t believe it when Donna yanked her into the end stall.  “Pull down those pants,” Donna instructed, even before the door was closed.
Marigold did as she was told, dropping slacks and cotton underpants to the floor.
Sitting fully clothed on the toilet seat, Donna patted her lap and Marigold fell into it.  At home, this was standard practise, but they were in public…well, in a public washroom.  When the top of Marigold’s head met the toilet paper dispenser, she turned around to watch.   “I’m sorry I was so late.”

Just a wee sample from that one.

My other story in Girl Fever is called "Taste of My Woman," and belongs to a "sense" series about girlfriends keeping in touch while one is away on business (phone sex much?):

Closing my eyes, I focused on the pleasured moan Monique released into my black Nortel phone receiver.  Warm sweetness caressed my taste buds, and I knew precisely what she’d place on my metaphysical tongue.
“You’re eating dark chocolate.  I can taste it.”  I peered down the hallways to make sure Sid wasn’t on his way back.  The coast was clear, and I was going all in. “Now, you tell me what I’m eating.”
Monique gurgled, but answered without pause. “I know exactly what you’re eating. You’ve got your face all up between my thighs, and you are just devouring my pussy.”
“Yes I am, babygirl, and your pussy is delicious.” There was a throb between my legs, like a drumbeat, at the sound of those words from her mouth and from mine.  We didn’t do this.  We didn’t talk like this.
“Oh, you are sweet,” Monique cooed. “Sweet as chocolate.”
I wondered where she was, if she was alone now, if she was reaching down inside her panties to play with her clit. God, I loved the image of my woman with her hand down her pants, slowly rubbing that sweet spot. I loved the image so much I was half tempted to slip my own fingers down between my pussy lips and play in that liquid heat. But I couldn’t do that…not at work…not sitting at my desk in my wide-open office…

Happy Friday, Everyone!
Giselle
Posted by Giselle Renarde at 7:54 PM