Lipstick Lovers Takes the Cake at the National Leather Awards 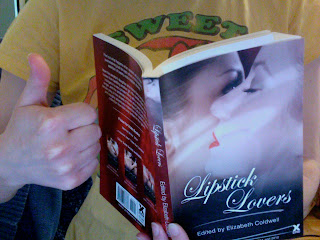 All the winning books are listed below. Have a gander:

National Leather Association: International, a leading organization for activists in the pansexual SM/leather community, announced the winners for excellence in literary works in SM/leather/fetish writing published in 2012 at its Annual General Meeting in Oklahoma City, OK on May 3-5, 2013 and held during Tribal Fire. The judges received a greater number of nominations this year than ever before and judging in most categories was quite difficult with such exemplary pieces of writing.

Victorious in the Pauline Reage Novel category is L. M. Somerton for "The Portrait' (Total-E-Bound). The judges were unable to concur on second place honors this year with 27 novels submitted for consideration. Honorable mentions therefore go to The Masters of Falcon's Fantasies by Cassidy Browning & Reggie Alexander (Siren Publishing), Power Exchange by A. J. Rose (Voodoo Lily Press), Eve Portrait of Submission by Steve Maser (Pink Flamingo Publications), Beyond the Edge by Elizabeth Lister (MLR Press) and A Forbidden Love by Lee Dorsey (Pink Flamingo Publications).

Nominations for literary works published in 2013 will open late this year.

Congratulations to all who won and thank you to all who entered!
Posted by Giselle Renarde at 10:38 AM