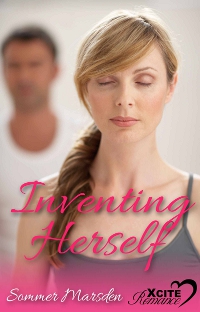 Inventing Herself by Sommer Marsden

Sophie Calhoun has a good job writing for a hot women’s magazine. Her latest assignment is to do an article about how a strong, confident woman can look deeper into herself to find her centre. The only problem is Sophie feels lost. On a whim one morning, looking for the answers to her unwritten article and the silent turmoil in her heart, she takes a hike. In the wilderness she finds a very large man sitting alone, calm and still and smiling – everything Sophie wants to be. When he opens his eyes and that smile is directed at her, Sophie begins to find herself…

All she could think was what if I slip? What does my ass look like? And, of course, who farted?
Turned out that wasn’t so much of a myth. Someone had let one go and everyone was acting as if it
was no big deal at all.

Which, technically, it wasn’t. It was just a fart, after all. Everyone had gas at some point in their lif –
‘You’re drifting,’ Joel said, his voice very close to her. So close it made Sophie go rigid. ‘Let me help
you straighten your pose.’

He stepped up between her spread legs and settled his hands on her hips. Then he proceeded to
move her a little here, a little there, until the stretch blazed up her calves and the backs of her
hamstrings. It blazed somewhere else too, Sophie noticed as he lingered, tweaking her pose.
When he stepped back from between her legs, his hand stayed on her lower back for a beat before
being removed. ‘Good,’ Joel said.

He was big and tall and obviously fit. A shock of dark – almost black – hair and grey eyes. His voice
was as smoky and sensual as his body.

Sophie felt colour come to her face that had nothing to do with yoga or being inverted. The class
lowered slowly to a plank pose and her muscles started to tremble. In her mind’s eye it was easy
to put a face to it now. This man, down between her legs, his mouth on her. His fingers separating
and skating over her nether lips. Finding her slick opening and plunging deep, curling to tease her G-
spot until she gasped. Then taking her own juices, running up to find the needy swell of her clitoris.
Circling and circling until plunging back into her cunt to stroke her most secret places again, his
mouth sucking, his tongue nudging, licking, licking, licking until …

Sophie did, but as she did a noise burst out of her. Her body, on the verge actually coming, supplied
the small blip and flutter deep inside of an almost orgasm. The sound was half sigh, half moan, and
very, very sultry. Way too sultry for muscle stretching.

She counted the heartbeats until class was over, she was so mortified. When Joel finally told them
to stand and everyone gave what seemed to be the customary “Namaste” a woman in green
leggings and a bright blue pullover whispered, ‘Don’t feel so bad. He has that effect on most of the
newcomers. Once he touches someone … they’re toast.’

Sophie tried to smile and waited to self-combust.

She nearly set a record changing back into her work clothes, but when she came out Joel called out
to her.

‘I was wondering –’ he said, sort of grinning at her.

Sophie caught the gaze of the green-legging woman. She was smiling, her look knowing.

‘Could I … call you? Take you out? Bring you wine and woo you with wild yoga tales?’ He smiled at
her and the lust that smile inspired struck right down through the centre of her like a lightning bolt.
‘Um, yeah … sure. In fact –’ She broke off, thinking maybe she shouldn’t say what she was about to
say. But fuck it. This whole “finding her centre” thing had taken her very close to thinking she was

nuts. Might as well act nuts, right? Maybe Joel was that missing something. ‘How about you come to
my place tonight. Bring that wine you mentioned and I can make a nice steak or – wait – do you eat
meat?’

He nodded, eyes flashing with amusement. ‘I do. But thank you for asking.’

‘It’s a date,’ he said. He gave her his number so she could text her address.

‘Yes. It is a date,’ she said and hurried out of the studio. Kate was going to kill her!

Posted by Giselle Renarde at 1:45 PM