New Charity Anthology~Coming Together: With Curves 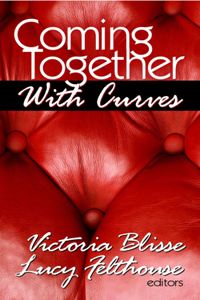 All proceeds from the sales of this anthology as well as any individual titles released in ebook or audiobook will benefit Parkinson's UK, an international charity.

CONTENTS (contributors new to Coming Together are BOLDED)


See me in there?  Yeppers, I'm a contributor to this charitable anthology, and I'd love to share a little excerpt with you:

“I was trembling,” Marisa confessed, pressing the button for the elevator.  “Could you hear it in my voice?  God, I thought I was going to toss my cookies.”
“No, you sounded totally calm!  I couldn’t believe it.  You just came right out and told him.”  Tariq wrapped an arm around his glowing wife as the doors chimed.  “But, honey, you tore my hand to shreds.  Look--you broke the skin.”
“Aw, poor Tariq,” she replied, kissing his boo-boo before pulling him into the empty elevator.  “You’re going to be so jealous when I’m mollycoddling this baby and you have to kiss yourself all better.”
“Kiss myself better?” he asked, trying to be all boyish and sexy as he pressed the button for the twenty-third floor.  “Nah, babe, I need your kisses.  Can’t do that all by myself.”
Thank God they were finally alone!  Tariq cuddled in behind his woman and wrapped his arms around her waist.  He’d been surprised, in the restaurant, that Darien had noticed, but he could see it now, that budding little baby bump.  This was for real.  Real life, no turning back now.
Their reflections stared back at them in the floor-to-ceiling mirrors on three of the four walls in this spic and span elevator.  Tariq rested his chin on top of Marisa’s head, watching her sparkle. His woman was a dream.  She was curvy and brilliant and hilarious—Halle Berry with a little meat on her bones.  Tariq was taller, darker, critics might say lanky, with the boyish grin of a high school kid.  An ideal husband?  Maybe not for everybody, but Marisa seemed happy with him.  If there’s one thing she could never question, it was his devotion.  He only had eyes for her.
“Did we always look this good?” she asked, giving him that sly sort of smile he loved so much.  Taking both his hands in both of hers, she ran them from her hips all the way up to her chest.  The stretchy fabric of her tight purple dress made his legs weak, but the thing between them didn’t seem to be having the same problem—it was long and strong and hard as ever.
“You always looked this good,” Tariq replied, giving her breasts a playful squeeze.  Oh, those massive globes of hot flesh felt so good in his hands.  He wanted more.  He needed it.
Marisa watched in the mirrors as Tariq circled his hands around her spectacular tits. “Can you believe these puppies are going to get bigger?”
“Mmm…”  Tariq growled in her ear, catching the lobe between his teeth.  He’d be a tripod soon, his dick was getting so big.  “I just love your puppies.  I’m going to be humping some legs, I love your puppies so much.”
“Legs?” Marisa laughed, raising her skirt.  “No husband of mine’s gonna be humping no legs.”


For links to vendors, check out http://www.eroticanthology.com/withcurves.htm

Posted by Giselle Renarde at 11:40 AM