That's the nicest thing anyone's ever said about me...

Well, I'm off on vacation. Be back in a week!  I've set a few posts to pop up while I'm away, but before I go I'd like to share something a special.

The other day, during my publisher eXcessica's Pride Month chat at Beth Wylde's yahoo group, my fellow author Gavin had this to say:

Giselle is one of my favorite authors to promote because her writing features a much wider array of characters for readers to identify with than anyone else I've worked with. When I encounter someone who seems doubtful about the value of erotica, I often say "Look at Excessica's catalog before jumping to that conclusion, especially Giselle Renarde."
~Gavin Atlas

Representing diversity isn't something I really think about in my writing. It just happens, and I imagine it's a product of many things: living in one of the most multicultural cities in the world, being born into a multiracial family, being queer, having a partner who is trans, and maintaining a lot of close friendships with people who are either immigrants or who have close ties to their parents' world cultures.

My writing is diverse because, when I look around, I see diversity.  It's not all same-same-same, so I don't back away from representing variety.

Thanks, Gavin. You made my year. 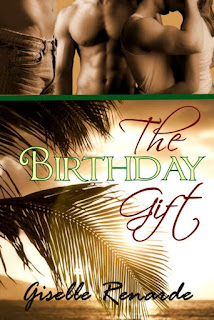 And if you're looking for a summery read that's been pleasing readers since 2006, check out THE BIRTHDAY GIFT.  Ooh... palm trees on the cover...


Meredith is a cake-baking, apron-wearing small-town Canadian mom. Her guiding principle in life is, “What would June Cleaver do?” That is, until a curious set of circumstances cause her to crash an outdoor gathering where she stumbles upon a pair of delicious hunks getting a little hands-on with each other. Surely June Cleaver would have headed for the hills at the sight! Not Meredith. This relaxed get-together really heats up when one man’s wife appears on the scene... and encourages Meredith to join in.
Whew! Hot stuff! But the story’s not over yet. There’s still the tropical vacation, the confinement in foreign prison, the trial for freedom... and, hey, where’s Meredith’s husband in all this? It is his birthday, after all...

Posted by Giselle Renarde at 1:08 AM