New Anthology! HUNGER: A Feast of Sensual Tales of Sex and Gastronomy

I feel like I haven't had a new release (I mean, a single-author title) in about 40 years.  Not so for anthologies.  I'm having trouble keeping up with all the new anthos I've got stories published in.

This one, for instance: 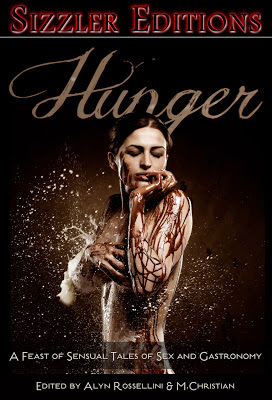 My story in this collection is called "The Sweetest Burn."  It's proof positive that I have an utterly filthy mind.  Kink, kink, kink.  That's all I see:


Wearing only a white apron, Chef entered the room holding a metal pot in one hand and a silicone pastry brush in the other.  He ignored her, at first, mixing his creation with the little blue implement and smiling like he could see the future in his sauce.
"What is it?" she asked.  She wasn't supposed to talk, but she didn't care.  If he didn't want backtalk, he could eat his food off china like a normal person.  But, no.  He wanted to taste it on her skin--she knew him too well.  The secret ingredient was that combination of her sweat and salt and body oils.  Her flesh was a regular bouquet garni of human aromas.
He raised the silicon brush up, allowing a viscous fluid, dark brown, almost burgundy, to drip back into the pot.  Was it molasses?  It did smell sweet, but she thought she got a whiff of chocolate, too, and…chilli pepper?  Strange combination.
"Mole Poblano," he said at last.
"I don't know what that is."
His gaze was steel.  So was his cock, judging by the tent in his apron.  "You don't need to know," he replied, stirring the dark concoction.  "You won't be eating it."
The bones of her wrists rubbed together as she writhed, and that sensation made her cringe almost as much as the knowledge that she'd soon be drizzled with mole poblano, whatever the hell that was.
"Are you ready?" he asked, stepping closer to the table where she kneeled, hands tied together, wrists tied to ankles.
"You act like I want this," she said.
"You do."

Want HUNGER?  It's available from Sizzler Editions: https://shop.renebooks.com/ProductDetails.asp?ProductCode=CHRISTIAN-19
Posted by Giselle Renarde at 12:05 AM