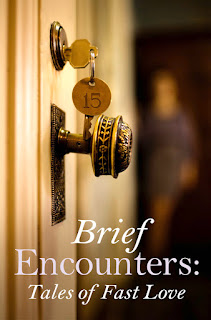 These Mischief anthologies always surprise me.  The prices are incredible!  If you're looking for quality and value, look no further...

But before I start sounding too much like a commercial, why don't I get to the point?  There's a new e-anthology on market, and it's called "Brief Encounters."  The publisher is Mischief, which is an imprint of HarperCollins.  The publication date is listed as January 24th 2013, but it appears to be available now, and the price is really, REALLY good for an anthology.

Sexy random opportunities so often arise when a girl is on the move with things to do and places to see. But sometimes, a passionate escapade is actually the journey’s ultimate destination.

Kelly embarks on a whirlwind romance in Paris, but the most intense passion was always waiting for her in a hotel room.

Suzanna is the best sales rep in her company, and she chooses her thrills where she finds them on the road, but there’s one guy in an airport who makes a lasting impression.

On a Greek Island, Vicky discovers that competing with a seemingly perfect woman for her boyfriend’s attention, produces the holiday of a lifetime.

My contribution to this collection is a lesbian cougar beach vacation/hotel sex story called "Her Ocean Saviour":


When Janet's girlfriend breaks her heart and she's convinced that all is lost, her loving mother convinces her to come along on a fun-in-the-sun beach vacation with Mom and Mom's best friend Heloise.  Janet thinks nothing can save her from her sorrow until she's bowled over by a huge wave and Heloise comes to her rescue.  Now there's only one woman Janet wants, and that's her mother's best friend, her ocean saviour Heloise.

Hey, why don't I share an excerpt?  I feel like I haven't posted anything hot in a while.  I'll give you some shower sex.  A lot of people arrive here at Donuts and Desires by Googling "shower sex," so I guess it's a fan favourite.

Excerpt from "Her Ocear Saviour" by Giselle Renarde:


This was a nice resort.  The bathroom was clean, white walls, floors like a blue slate, which extended up the sides of the shower stall.  Heloise climbed in with Janet still latched to her neck.  This shower had one rainfall head that hung down from the ceiling, beautiful gleaming steel, the large circle overhead big enough to wash an elephant.  They stood underneath, holding each other in anticipation.  When Heloise turned on the water, they cringed together, hugging one another hard.  Was the cascade really so cold, or were their bodies just overheated from the sun?
As the temperature regulated, Janet felt herself breathing hard, head tucked against Heloise's shoulder.  Their breasts pressed softly together with each breath, wet bathing suits clinging one to the other.  Janet's head was floating like she was high on salt water.  Her nose and throat still burned, but holding Heloise close made it easy to ignore that stinging sensation.
"Will you wash me?" Janet asked.  Her voice was small and she knew she was pleading, but she didn't care.  "With the soap?"
"Sure, baby."  Heloise grabbed it and swept the bar of white soap across Janet's bare back.
Janet's one-piece covered a lot of skin, which was preferable on the beach, but now she wished she had on a bikini like Heloise's.  She wanted to feel their bodies moving together, flesh on flesh, and there was only one way to make that happen.  Reaching for the thick black straps of her suit, Janet shamelessly peeled the sopping, stretchy fabric down.
The motion was torturously slow as Janet waited to be reprimanded by Heloise.  She was sure her mother's friend would screech, "What are you doing, girl?  You don't get undressed while I'm standing here with you!"
When Heloise made no objections, not a peep, Janet kept going with the strip show.  She pulled her suit down until her hard nipples poked out, begging for affection.  Heloise was still holding her tight, washing her back in sweeping circles, not looking.  Not yet.  Janet pushed her wet bathing suit down farther, wiggling it past her hips, shoving it down, down, down as it clung to her thighs, twisting itself into a sopping rope.
Naked, Janet kicked her suit behind herself and rubbed her wet curves against Heloise under that cascade of glorious water. "Do my front," Janet whispered, her voice barely audible over the shower's hiss.
And, much to her amazement, Heloise pushed her until her back met the shower wall.  Here, Janet was just beyond the cascade's reach, though Heloise's backside was still getting wet.  When Heloise looked down at Janet's naked body, her eyes grew dark.  Janet watched the woman consume her tits visually, and then stare, actually stare, at her cunt.  For a fleeting moment, she wondered if trimming it would have been a good idea.
Apparently, Heloise liked a thick bush, because the hand without the soap in it went straight between Janet's legs, cupping her throbbing mound.  Thank God she was leaning against a wall! Janet nearly collapsed when Heloise snuck those long, elegant fingers between her pussy lips, exploring the juicy folds, fingering her aching clit.  Janet cried out with the pleasure of it, but her throat stung when she did, and she closed her lips, biting the inside of her cheek and trying not to make any more explosive noises.  She whimpered, though, as Heloise stroked her desperate pussy with one hand, tracing the soap across her chest with the other.
The soap felt amazing on her skin, all slick and slippery, but she whined, "Fingers… fingers!" until Heloise dropped the soap and cupped Janet's big breast with one hand.
Janet was so afraid Heloise would stop at any moment, back away, asking, "Why are we doing this, baby girl?" that she just kept talking, rambling, giving whatever instruction came to mind.
"Pinch my nipples."  Janet spoke quietly because her throat was still burning.  "Pinch 'em, Hel. It feels so good."
So Heloise gave it a shot, taking Janet's nipple between her thumb and forefinger, but every time she pressed them together that soapy nipple shied away, slipping from her grasp.  She giggled, and Janet did too, but they were obviously both more in the mood for lust than laughter because they pulled each other close simultaneously.  It wasn't one first, then the other following, oh no.  It was Heloise and Janet both wrapping their arms around the other's back and pressing their bodies together.
Janet whispered, "Kiss me"...

Posted by Giselle Renarde at 3:09 PM