Guest Post from Slave Nano: In support of 'watersports' 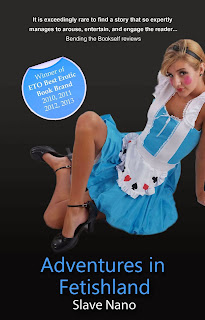 Now, I’m conscious all publishers I’ve come across have this as a taboo subject.  I also understand that often this is as much down to the distributors as the publishers and, well, if nobody’s going to distribute your book you’re a bit scuppered.   I enjoy writing watersports scenes!  They can be fun, dirty or intense, however you want to play them.  But I’ve always ended up having to cut them out of my stories, as I did from my original draft of my erotic novel, ‘Adventures in Fetishland’, a bdsm/fetish reinvention of the Alice In Wonderland tale, which had a couple of them in.

I should stress I’m not intending any criticism of my publisher  (Xcite Books) here - I don’t have a problem with making changes and I’m happy to work with a publisher’s concerns to get my writing published and out there.  But, it’s just something I wanted to comment on.  ‘Adventures in Fetishland’ has scenes of corporal punishment, nipple torture, cock and ball torture, electrical play, medical play, use of sounds, strap-on-play, cling film mummification, breath play and an attempted anal rape scene.  So, you can see, it isn’t exactly for the faint hearted!  But, one of the scenes I had to edit was a comic one involving Kim, the main character, pissing in a tea pot!  I just have trouble grappling with how all that other extreme stuff was acceptable but a funny scene at a fetish hatter’s tea party involving pee had to be axed.

I also feel both publishers and readers are missing a treat here as there is such a lot of potential in the subject.  There is loads of dramatic tension in watersports – they get right to the heart of the psychological relationship between a dominant and submissive.  They can be both a humiliation or a reward depending on the context and how they are delivered and described and provide great opportunities for erotic writing.
So, as a special treat (if you can call it that!) the story extract I’m attached to this blog is the unexpurgated scene from the Fetish Hatter’s tea party, which I had to edit and which appears in the book with all references to piss, wee or golden wine mysteriously replaced by the Hatter’s “special blend of tea”!

Buy links
Adventures in Fetishland is available at:

Oh dear, thought Kim, this tea party could be very weird.  She cast her eye across the table; it was certainly a wonderful spread.  There were two huge round tea pots and places set with china cups and saucers and plates.  The centrepiece was a large multi-tiered black cast iron cake stand that was filled with a delicious assortment of cup-cakes.  They were iced in shades of pastel green, yellow and pink and decorated with cherries or walnuts. There was bread, butter and jam, home-baked scones and jellies and trifles.  I’ve not seen party food like this since I was a child, she thought.  Kim was ravenous and thirsty, just ready for afternoon tea.

“Pour yourself a cup of tea,” offered the Hatter.

Kim picked up the big round yellow tea pot and was about to pour a cup when the hare and dormouse intervened.

“No, No, my dear, you don’t want to drink from that tea pot,” shouted the hare.

“No, no,” muttered the dormouse, “definitely not that tea pot.”

“Why, what’s wrong with this tea pot?”

“The orange tea pot is for the tea,” said the hare.

“And the yellow tea pot is for the wee,” said the dormouse.

The Hatter replied, “Why of course, that tea pot’s for them.”

She pointed to two of what Kim presumed were Mistress Nemesis’s male slaves.  Kim hadn’t noticed them yet. One had a leather hood on his head, the other an iron cage.  They were both sat behind her forlornly.  Waiting to be fed perhaps, thought Kim?

“They are probably thirsty,” said the Hatter, “would you mind doing the honours, girl?”

Kim picked up the huge round yellow tea pot with both hands and walked over to the two men.

“Should I pour them out a cup?” she asked.

“No, no, they can drink straight from the spout,” the Hatter said.

“Yes, direct from the spout,” echoed the hare.

“Oh, definitely from the spout,” confirmed the dormouse.

The hooded slave lifted his head up and positioned it so that Kim, holding the tea pot high over him, could tip the spout up and pour its contents straight into his mouth.  She did just that and a stream of yellow fluid came flooding out of the spout.  Oh my god, it really is pee, thought Kim.  It was a clear golden colour but it did not smell too much so it must have been quite fresh.  Kim wondered if it was the Hatter’s.  Most of the piss poured straight into the slave’s mouth and he guzzled it down eagerly, but some splashed onto his body and quite a bit spilt onto the floor.

The tea pot was soon empty.

“He can’t waste any,” called the Hatter, “make him drink what he’s spilt off the floor.”

“Go on, drink it,” said Kim tentatively at first and then more firmly, “come on drink it up.”

Kim did exactly that with the shiny leather shoes.  The hooded man howled in pain but soon got his head down onto the floor and started lapping the golden waters up.

“Give the rest to the other one,” ordered the Hatter.

“I’m sorry but the tea pot is empty now.”

“Well, there’s nothing for it, you’ll just have to fill it yourself.”

“Sorry, you mean you want me to pee in the tea pot?”

“Yes, you heard the Hatter. You must piss in the tea pot,” added the hare.

“Yes, piss in the tea pot,” said the dormouse.

It was true, that Kim was desperate to go.  She hadn’t been to the toilet since she had left the massage parlour and that was hours ago. Oh well, she thought, I need to go.  She put the yellow tea pot on the floor, took the lid off, crouched over it, hitched up her latex dress and let release a stream of hot piss into the tea pot.  God, I needed that. It was quite a relief to empty her bladder.

“Now bring the tea pot back here, put it on the table and let it brew for a bit,” said the Hatter. 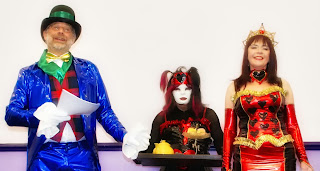 His work usually has dominant female characters and submissive males. His stories explore the tensions between dominant and submissive and the boundaries between pain and pleasure, physical and mental bondage and retribution and reward.

Slave Nano lives in Yorkshire in the United Kingdom.  He works full time and juggles his writing with this.  His work has been published by Xcite Books and House of Erotica.

Find out more about Slave Nano at www.slavenano.co.uk

Posted by Giselle Renarde at 11:37 AM